Renovation Strategies to Live at Home‚ÄĒStylishly‚ÄĒInto Your 80s 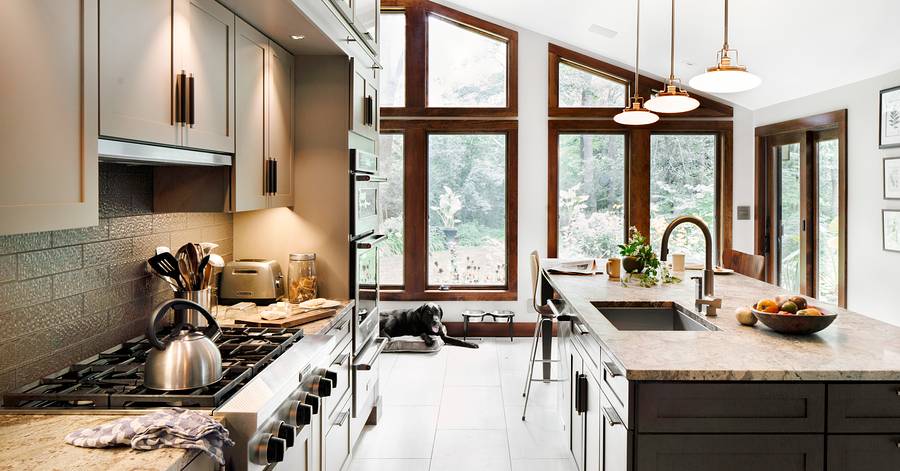 THE HANDSOME East Chatham, N.Y., kitchen of interior designer Kevin Weldon and his partner, real-estate agent Peter Newman, doesn‚Äôt appear kitted out for enfeebled octogenarians, but it is. Well-disguised details take into account the failing eyesight and limited mobility the 60-something couple knows they will encounter in their golden years, a term that fools no one. Copious recessed and under-cabinet lighting supplements the three pendants over the island; much of the Shaker-style cabinetry, from Home Depot‚Äôs Decora line, consists of drawers rather than object-swallowing cabinets; the stacked stainless-steel KitchenAid wall ovens obviate bending over; and the luxurious roominess‚ÄĒpassages of 46 inches instead of the standard 36‚ÄĒguarantee access to people of any ability.

‚ÄúYou wouldn‚Äôt notice any of these features unless they were pointed out,‚ÄĚ said Mr. Weldon, who noted that the tweaks that make their home safe enough to put off moving into assisted living didn‚Äôt add to the overall cost of their kitchen remodel. ‚ÄúPeople don‚Äôt say, ‚ÄėOh, you built this so you can bring in a wheelchair.‚Äô They come into the kitchen and say, ‚ÄėWow!‚Äô ‚ÄĚ

American baby boomers are reaching retirement age at a rate of 10,000 a day, according to AARP. But apparently they‚Äôd rather regale friends with apocryphal recollections of being at Woodstock than contemplate their own mortality and plan for their dotage, even though they risk paying dearly for such shortsightedness.

‚ÄúFalls are the leading cause of fatal and nonfatal injuries among older persons,‚ÄĚ said Erik Listou, co-founder of the Living in Place Institute, who modified the accepted term ‚Äúaging in place‚ÄĚ (AIP) when he co-founded it, because ‚Äúnobody wants to talk about getting old.‚ÄĚ The Denver-based educational organization trains medical professionals, Realtors, designers, and contractors in AIP principals. ‚ÄúThe cost of a fall is estimated at around $34,000 in just direct medical expenses,‚ÄĚ he continued. And according to Genworth Financial‚Äôs 2017 Cost of Care Survey, the national annual median for assisted living is $45,000 (as high as $72,000 in some states), so making your home safe enough to maintain your independence clearly makes economic sense, what with the average midrange bathroom remodel costing about $19,000, according to Remodeling magazine.

But it isn‚Äôt the cost that causes clients and builders to avoid the topic. After all, many AIP modifications, such as replacing knobs on cabinets, faucets and doors with pulls and levers, can be made without a major overhaul. Homeowners fear that AIP will look ugly and institutional. One glance at a bathroom grab bar and most of us can smell disinfectant and hear the squeak of nurses‚Äô shoes.

In a spalike bathroom in Bethesda, Md., shown above, sleek grab bars double as towel bars, part of a design by residential designer Jonas Carnemark that carefully married the functionality needed by a retired radiologist (he currently uses a walker in the home and eventually may need a wheelchair) and the taste level of his art-historian wife, both in their early 70s. The bathroom was part of an expansion of the master suite on the ground floor that allows for single-story living, another AIP recommendation.

Grab bars from Kohler‚Äôs Purist line, set at right angles that aesthetically underline the room‚Äôs linearity, are never out of reach. The bars and the niche edges of brushed aluminum provide guides to help with orientation. The graphite-color porcelain tiles on the floor include a slip-resistant finish and the wide shower with no curb accommodates a walker or wheelchair.

‚ÄúMy client enjoys a good soaking tub,‚ÄĚ said Mr. Carnemark. ‚ÄúThis design allows him to seat himself on the bench and slide into the tub with the help of the bars.‚ÄĚ Still, one could easily mistake this in-vogue room for a resort bath and shower. ‚ÄúUsing organic, natural tile as opposed to, say, a diamond pattern, matching that tile‚Äôs tone in the Silestone bench and tub ledge, using an undermount tub and the consistently orthogonal look all help make it feel noninstitutional,‚ÄĚ Mr. Carnemark explained.

‚ÄúWe had traveled to Japan several years ago,‚ÄĚ said the wife, who asked not to be identified by name, ‚Äúand were very much taken by the so-called ‚Äėwet-rooms‚Äô in Japanese hotels, where the room opened to the shower and the bathtub was in the same space.‚ÄĚ She uses the couple‚Äôs new bath as well, and enthused that you would never know the room is designed around her husband‚Äôs physical limitations. ‚ÄúThe grab bars look like they‚Äôre decorative.‚ÄĚ

Far from diminishing the value of a home, a worry some designers report, design for aging in place can actually entice buyers, said Diane Harris, former editor in chief of Money magazine and currently the editorial director of Considerable, a financial and lifestyle brand targeting people in their 50s and 60s.

‚ÄúA first-floor bathroom that includes a shower adds more flexibility to a house layout,‚ÄĚ she said. ‚ÄúA first-floor laundry room to avoid stairs is great for seniors‚ÄĒand also a young family.‚ÄĚ But aesthetics are key, she continued. ‚ÄúChances are, if it looks good to you, it will look good to prospective buyers.‚ÄĚ

Few homeowners show the foresight of Messrs. Weldon and Newman. After all, they are healthy, working, active and only in their 60s. Some of their motivation for planning ahead when renovating their 1824 house came from experience. ‚ÄúMy mother had very bad arthritis in her hands and macular degeneration,‚ÄĚ said Mr. Newman, ‚Äúso day-to-day tasks like opening drawers or doors were very hard for her. It was a struggle.‚ÄĚ

Mr. Weldon, though a designer, is not a Certified Aging in Place Specialist (CAPS), a designation given by the National Association of Home Builders (NAHB). Nevertheless, the couple researched the issue. Mitzi Beach, a CAPS designer in Wichita, Kan., and an expert in boomer lifestyle, points out that there are no Americans with Disabilities Act (ADA) codes for residential properties, as there are for commercial properties. But one can find AIP guidelines on the NAHB website, nahb.org, and can find CAPS designers there and through the American Society of Interior Designers (asid.org). Mr. Listou‚Äôs organization trains and designates Certified Living in Place Profeessionals (CLIPP), who can be found at livinginplace.institute.

Meanwhile, file this under ‚ÄúI‚Äôll never need that.‚ÄĚ CAPS designer Michael A. Thomas, in Palm Desert, Calif., recalls one particularly active (and house-proud) tennis player in her early 60s who wanted a gorgeous master bathroom. She feared the modifications would be unattractive and, even more worrisome, present her as old and in need of assistance. ‚ÄúWhat will the neighbors think?‚ÄĚ she balked. Mr. Thomas persuaded her to go with a taller toilet that eased sitting and getting up, a wall-mounted sink vanity that could accommodate a wheelchair, a curbless shower and tiles reinforced to hold grab bars.

Six months after the installation, Mr. Thomas‚Äôs client shattered both her knees on the tennis court. She was able to return home, instead of spending weeks in a rehab center, thanks to having brilliantly opted for a safer bathroom‚ÄĒa fact she was delighted to share with her neighbors.

STEALTH HELP // Six Furnishings That Make Life Safer, and Do It In Style

In close competition with the standard grab bar for the most geriatric-looking furnishing is the white, plastic, slatted shower chair. Much more spalike: this one, in Brazilian walnut. SerenaSeat Wall-Mounted Shower Seat, from $429, invisiacollection.com

Chairs need to be easy to get in and out of. This seat‚Äôs height of 19 inches isn‚Äôt too low, its depth of 19 inches won‚Äôt swallow up a person, and the two sturdy arms will help with self-ejection. Winston Club Chair, $495, onekingslane.com

Single-lever faucets offer the most function with the least effort. This one‚Äôs cross-hatching makes grasping even easier. Litze SmartTouch Pull-Down Faucet with Arc Spout and Knurled Handle Grande by Brizo, $780 Central Showroom on 56, 212-588-1997

Older paws have trouble with grip. For doors with latches, levers require the least effort. Graceful curves make this one particularly ergonomic and not too clinicalOsprey Lever, from $186, rockymountainhardware.com