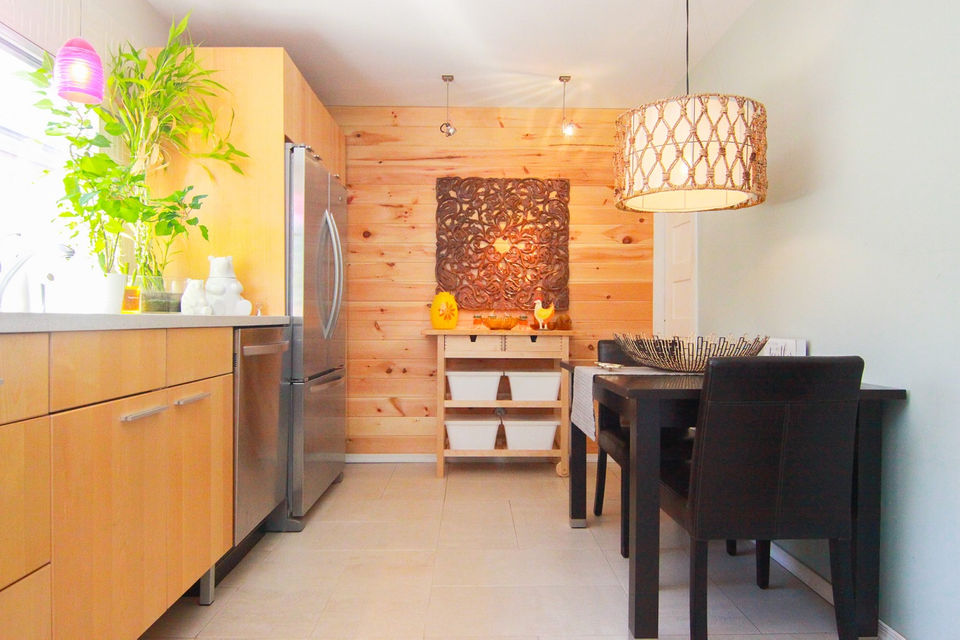 N.J. home makeover is a regular feature on NJ.com that showcases designer, contractor and DIY renovations, large and small. To submit your renovation for consideration, email home@starledger.com with your full name, email address, phone number and town/city. Attach “before” and “after” photos of what you renovated.

When Tito Gonzalez and Wendy Cruz began working on what would be their half of a 1942 Colonial-style duplex, it was about a week before their April 2005 wedding day.

They had just closed on the Bloomfield house, and they were cleaning it room by room. Their plan was to live with the house as it was for a few years until life slowed down a bit and they had saved up for home improvements. They were both working full time, and Wendy was traveling to Manhattan for her master’s degree program.

But on that April day, the bathroom had so much built-up grime that Wendy was compelled to stand in the bathtub with her shoes on as she tried to clean the surrounding shower walls.

Her future husband was perplexed by this cleaning method. She showed him how the strong detergent she was using changed color in reaction to the dirt but did little to remove it.

“Even when wiped, the tiles in the shower looked the same,” she said.

When his wife-to-be resolved that she would “just take a shower while wearing my flip flops,” Tito Gonzalez knew it was time for action.

“He took it upon himself to fix this room for me with the help of his cousin,” Wendy Gonzalez recalls. “When we returned from our honeymoon and moved in, the tile and fixtures had been replaced.”

It was the first of many do-it-yourself projects, often taken on as a couple with the help of family and friends, some of whom have construction experience. Tito, a master automotive technician, also is creative and naturally handy, his wife said.

“We went into this house fully knowing and accepting that there was a lot of work that needed to take place in order to turn it into our home,” says Wendy, a certified interior and lighting designer who owns the Livingston home decor shop Modern Ornament, which doubles as her design studio.

In the 1,100 square feet of their two-bedroom, one bathroom house, a storage attic is the only area that has not been updated. In the 13 years they’ve lived there, they’ve painted and paneled walls and ceilings, installed a living room floor, replaced kitchen cabinetry, and put in new sinks and faucets. They ripped up old carpeting to reveal their home’s wooden floors and turned a side porch into a designer pantry with Ikea cabinets, glass backsplash tiles and wooden counters.

Initially, they thought their first home together would be a condominium, but what attracted them to the Bloomfield house was getting their own backyard.

“That is not something you are going to get with a condo,” Wendy said.

Their extensive renovations have also involved the backyard, where they replaced wood on an aging deck.

With a masters in lighting design, Wendy has been able to apply her training at home and in her store.

“A single fixture cannot always provide adequate lighting,” she notes. “For most rooms in our home, I opted for a main decorative pendant or a ceiling-mounted light, and then I provided more layers of light through additional ceiling or wall-mounted light fixtures and table lamps. It’s the combination of multiple light sources that evokes an added feeling of comfort and coziness.”

She has used costly glass or stainless steel tiles as borders or insets. In this impactful strategy that has helped stretch their home improvement dollars, basic white tiles were made more interesting by alternating rows of different sizes or setting them at angles.

“Our focus with material selection has always been simplicity and quality,” Wendy said.

They have renovated without moving walls, making mostly cosmetic changes and replacing fixtures, “taking advantage of the bones of the house and breathing in new life through materials.”

Taking on one room or project at a time, they have lived in their house while working on it. This helps Wendy Gonzalez empathize with clients who might need to endure what she calls the overwhelming experience of living though a renovation.

“You are really working through a mess for a little while,” she says. “It’s just having to organize things constantly and clean things constantly. You can’t really have people over. Things take longer than you planned.”

While all this can “test your patience,” she notes: “As long as you have taken the time to explore your options and make informed decisions, it’s well worth it for years to come.”

Who did the work?

“We did a lot of the finish upgrades ourselves,” says Wendy Gonzalez. “Our exterior painting, including the metal siding, wood deck and wood fence were done by Onpoint Painting, based in Belleville.” They also hired electrical contractors and tile installers for some of the some.

How long it took

“It’s always been a work in progress,” Wendy Gonzalez says, estimating that they’ve been working on the house since they moved there.

About $55,000 to date. As a professional interior designer, Wendy Gonzalez was able to buy materials used in their home at discounted industry rates.

On backsplash and accent tiles, including the unique glass tiles used in their expanded pantry. Also on the exotic angelim wood flooring in their living room.

By doing much of the work themselves, using basic tiles and accenting them with more expensive tiles, and splurging on designer hardware instead of high-end cabinetry.Â Â

What they did themselves

“Refinishing surfaces and upgrading materials became something we did together,” Wendy says. “Our weekend-ish projects now make up our stories about every element of our house.” They shopped for the interlocking panels and installed the kitchen’s wood accent wall over the holidays. “The stairs in the basement were painted less than 12 hours before we expected company, and we weren’t sure if they’d dry in time.”

“Seeing our house as a whole and welcoming people to it,” Wendy says. “But my greatest pride and joy lies in the fact that my husband feels very much at home in it, and that it’s both something that reflects our style and that we know we worked on together.”

What they’d have done differently

“Honestly, I wouldn’t change a thing,” Wendy says. “Except maybe painting indoors in 90-plus-degree weather before we had central air conditioning.”