A cottage to call home 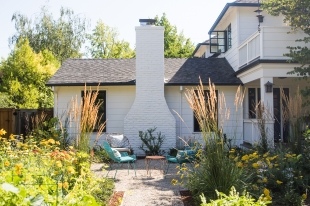 When Jennifer Fisher embarked on her third home-construction project in 2017, redoing her kitchen, a bathroom and re-configuring some rooms, she had previous experience to draw from â€” but remodeling the 1940s cottage would still mean surprises in the walls and unforeseen expenses.

The good news was she knew how to pick her kitchen cabinetry and to paint her window frames dark. She also knew that if she spent money now to fix termite damage, she wouldn’t have to deal with it again.

In the end, the home that she loved when she first walked into it two decades ago is liveable and has the features she meticulously planned for. She first bought the two-bedroom, one-bath cottage in west Menlo Park in 1996.

“I loved this house. When we came in and sat in this house, I said, ‘Oh my God, this is my house.’ It had beautiful bones,” she said.

During her first remodel of the cottage in the 1990s, she moved out and spent a year adding 900 square feet, including a second floor with two bedrooms and two bathrooms.

She and her family lived in the house for nearly 15 years before buying a lot on the same street and building a larger Spanish-style home that Fisher had a careful hand in designing. They rented out the cottage until last year, when Fisher had a life change. She sold the Spanish house and began to remodel the first floor of the cottage, including the kitchen, a bathroom, dining room, bedroom, living room and entryway.

“We almost gutted the first floor,” she said. In the end, “We didn’t move any interior walls.”

A major bump in the road was the exterior brick facade on the living room wall was stuck directly on plywood, a haven for termites. The bricks were torn off, the fireplace redone carefully with a gas insert and the new wood siding cut to match the chimney’s curves. The interior wall structure was also made inhospitable to future termites. That was $20,000 Fisher hadn’t planned on.

Inside, an existing first-floor bedroom had a “charming” bay window, but a wall chopped up the view through the adjacent dining room. With an opening made in the wall, the sight lines from the dining room could fall on the back wall, which was fitted with shelves to create a cozy library.

“I like to have flow and sight lines,” she said, but “I wanted to have separate rooms.” As a compromise, she opened the library wall, then opened the wall that divided the kitchen from the dining room.

One of her contractor’s employees cut a large rectangular opening in the kitchen wall, making the top portion curved instead of squared off. Fisher loved it.

She drew from experience in her Spanish house to carefully measure the depth of each cabinet drawer so that her ladles and spatulas would fit without catching, and her pans would slide smoothly into deep drawers. She had the quarter-sawn oak cabinets added in the early remodel taken out and replaced with hard-baked white lower cabinets. The kitchen has only one upper cabinet, small with a glass door to hold glassware, and a cabinet for sheet pans above the double wall ovens.

The Wolf gas range has six burners, and the double Thermador electric wall ovens which she bought in the 1990s were reinstalled “because they worked better than new ones,” she said.

The large butcher block island has bright blue open shelving underneath, and the microwave oven sits under the island as well.

Throughout the first floor, Fisher chose a finish called “Level 5 drywall” that has been spread with two coats of “mud” and sanded lightly to remove tool marks. Then a thin skim coat was added, sanded lightly and checked with a halogen light to look for any imperfections. This produces a smoother finish with a consistent texture.

Fisher calls the home’s architecture Arts and Crafts with a touch of Spanish.

When remodeling an older home, Fisher wisely advises, “You have to not freak out.”

The original living room was always too cold in the winter and too hot in the summer. It had no roof insulation and the eaves hung way over the back patio, making it impossible to put out chairs for entertaining. Fisher boldly had the roof removed, had foam insulation put in, and the roof eaves cut back.

After the new living room’s brick facade was removed and wood siding added, Fisher wanted to keep the deep window sills inside. So the builder preserved them by double framing the wall.

She gutted and re-tiled the first floor bathroom, taking out the bathtub and replacing it with a curbless shower. She was able to use extra painted tiles from her former home to line the shower and floor, combined with emerald green and white “star and cross” patterned wall tile. She even had enough tile to cover the new pool wall in the backyard.

The home is surrounded by what Fisher calls a “monastic garden,” built on axes with geometric shapes like traditional Moorish gardens in Spain. The front garden is made up of in-ground brick-edged vegetable beds surrounded by various dwarf and small fruit trees.

Length of project: 7 months from demolition to completion.

« 15 Dos And Don’ts Of Property Maintenance Homeowners Should Be Aware Of RePurpose Depot, local nonprofits use recycling to help hurricane recovery »