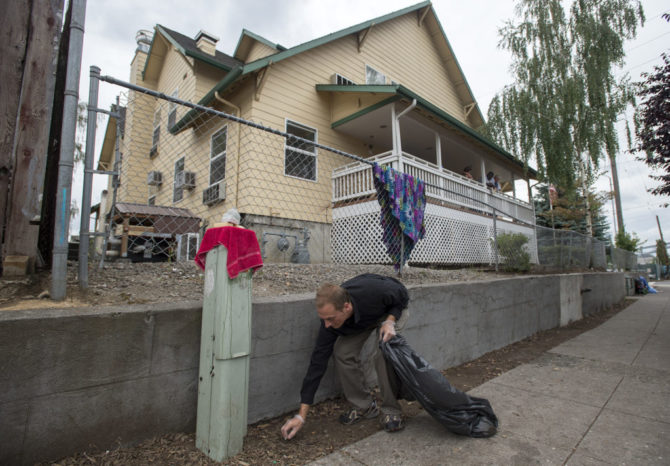 Share House, the menâ€™s homeless shelter in downtown Vancouver, is struggling with sanitation problems while its kitchen and public restrooms are closed for remodeling. Homeless service provider Share closed the ground-floor facilities July 9 and shifted its hot meals program to the homeless day center about a mile away.Share House residents can still use restrooms and showers located on other floors.Although water to the ground floor was shut off and the entrance was barricaded, people have broken in to relieve themselves, said Amy Reynolds, deputy director of Share. People have defecated in the unusable restrooms and a ground-floor office, and there has generally been more problems with fecal matter on and around the property since the remodel began, Reynolds said.Share directed clients to the day center at Friends of the Carpenter for sack lunches and services, and also set up portable toilets there. Share and the city of Vancouver tried a placing portable toilets outside Share House, but there were problems with people stuffing the toilet vaults with clothing, needles and other foreign objects, which make them difficult to pump, Reynolds said.â€śItâ€™s just really difficult to have a tent city outside of Share House,â€ť she said, adding that there are ongoing conversations about how to improve the situation.An estimated 50 to 60 people live outside on the blocks surrounding the shelter at 1115 W. 13th St. Several city departments clean the streets, typically on a weekly basis, to sanitize the area.Share aims to finish remodeling the kitchen, restrooms and a janitorâ€™s closet by the end of August. Share House opened in 1999 and its kitchen hasnâ€™t been upgraded since then. The hot meals program prepares nearly 92,000 meals annually. Last summer a sewage backup prompted Share to stop letting nonresidents shower at the facility or use the restrooms outside of meal times.Â Source: https://www.columbian.com/news/2018/jul/30/share-house-remodel-leads-to-sanitation-issue/