Move this kitchen to the bigger room: home open to public Sept. 8

Don Everything, remodeling a kitchen 0
+5Â

Remodeled Home Open House. A rear elevation makeover to the home of Chris and Cynthia Heimann of Arlington will be opened to the public on Saturday Sept. 8 from 12p.m. to 4p.m. By re-purposing adjacent back rooms, Sun Design Remodeling accommodated a gourmet kitchen 40 percent larger than its predecessor. The plan segues to a new screened-in porch linked to a grilling deck.

An interior remodel and screened porch addition to a 50-year-old home in North Arlington will be opened to the public Saturday, Sept. 8 from 12 p.m. to 4 p.m.

The revised space segues to a screened-in porch and grilling deck that features garden views and an al fresco dining venue with rotating fans, a skylight and even a pizza oven.

The house at 3518 North Nottingham St., Arlington is owned by Chris and Cynthia Heimann, who have occupied it for 16 years.

According to Craig Dursoko, Sun Design’s founder and chairman, the Heimanns initially considered building a new addition, but when they asked the remodeler, he proposed an alternative approach that would entail re-configuring living space within the envelop of the existing home.

â€śThe Heimanns had actually upgraded the kitchen a few years ago, but the stairwell, connecting the first and second floor, took up over 12.5 square feet of front-to- back floor space, restricting the kitchen’s width to about ten feet,â€ť Durosko recalls. 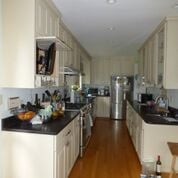 BEFORE Kitchen.The former galley kitchen was too narrow to allow more than one cook at a time. The owners had considered building an addition, but Sun Design’s Craig Durosko showed the couple how to accomplish their goals while staying within the envelop of the existing home.

The home’s southwestern corner, however, was occupied by a mostly unused home office accessible via a short hallway with a powder room off to one side. These rooms absorbed over 100 square feet of floor space and (importantly) did not abut the staircase.

Measurements in hand, Durosko and team saw an option of relocating the kitchen to the opposite side of the rear elevation.

â€śThere were lots of infrastructure considerations, but, as a space plan, the move made sense,â€ť the remodeler recalls.

Searching to better rationalize the first level floor plan overall, lead designer Clare McCaffrey saw early-on that achieving the scale and symmetry appropriate for the new dining porch would entail moving the rear access door to a spot in the middle of the rear elevation.

This in mind, McCaffrey developed plans for a corridor between the sitting room and the new kitchen, which would also accommodate the relocated powder room.

The floorplan called for eliminating an office in the home’s southwest corner and relocating the powder room to a newly-designed corridor situated between the kitchen and a sitting room. The rear door was moved to the kitchen for better access to the dining porch and grilling deck.

With a course of casement windows assuring abundant natural light, and custom-designed built-ins displaying art books and collectibles, the hallway is a natural adjunct to the sunny reading room that formerly provided a rear access door.

Sitting area.Â Perfect for reading, the revised sitting area is steps away from a corridor (rear door right) designed to display art books and other collectibles.

Moreover, aesthetically, the new room is aligned with the more nuanced and articulate interior design scheme that is explored throughout.

Homeowner Cynthia Heimann, who is a commercial architect, was especially pleased with the collaborative input of both McCaffrey and specialty designer Morgan Hutchinson.

â€śThey were exceedingly aware of what’s on the market and what would work in relation to our developing interior design scheme,â€ť the homeowner recalls. â€śThe proposed box bay window in the kitchen, for instance, required only a two foot cantilever, yet provided critical storage and clean-up space– and opened up a really beautiful backyard view that really brings the room to life.â€ť

The food prep island and dining counter, which includes a cook-top range, a sink and seating for three, also provides cabinetry for china and crystal ware. The frameless acrylic cabinets in combination with gray wall paint further reinforces understated elevations, in which small variations in color and texture stand-out.

The pattern in the Avalon marble that surfaces the island was cut out of a larger slab specifically for this application. Likewise, the honed granite surface around the sink helps anchor the color scheme.

On a related note, Hutchinson makes a wry reference to the elliptical archways in the home’s front rooms, in the unique niche she created for displaying a framed poster the couple had purchased in France many years ago.

â€śIt’s quiet the personalization that makes the whole feel so much like home,â€ť Cynthia Heimann says. â€śOn that score, Morgan and Clare were very personable, and very easy to work with.â€ť

John Byrd has been writing about home improvement for 30 years. He can be reached @ 703/715-8006, www.HomeFrontsNews.com or byrdmatx@gmail.com. Send photos of interesting remodeling projects to: b2b@homefrontsnews.com