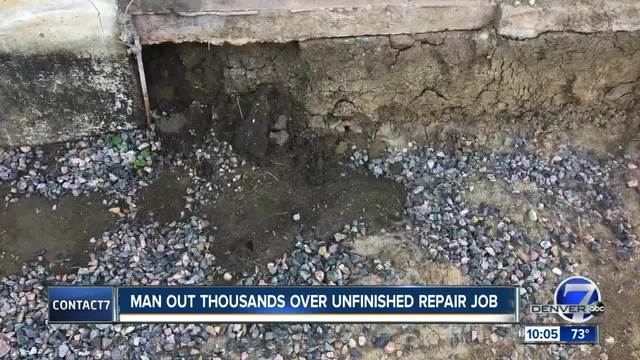 Editor’s note:¬†Contact7 seeks out audience tips and feedback to help people in need, resolve problems and hold the powerful accountable. If you know of a community need our call center could address, or have a story idea for our investigative team to pursue, please email us at¬†contact7@thedenverchannel.com¬†or call (720) 462-7777. Find more Contact7 stories¬†here.

DENVER — Contac7 is about helping you fight the fights you can’t on your own, so when a man called us¬†saying he paid a contractor $15,000 for a job that was never finished, we wanted answers.

Beau Trujillo wanted to fix up the property that’s been in his family since the 60’s.

“I‚Äôm trying to make my family’s home nice. I live there alone now, but we have holidays over there, and it‚Äôs always open to the family. So it‚Äôs important to me,” said Trujillo.

He was referred to a contracting company called Modern Concept Remodeling, through a friend. The first impression was a good one. Trujillo said the contractor even brought his family over.

“He was a family guy. He said all the right things,‚ÄĚ said Trujillo. “They gave me the impression they were a small business and a sort of mom and pop shop. I don’t know, I trusted him.”

He hired the contractor team to repave the driveway and a contract was signed. It would cost $15,000. Trujillo originally wrote a check but was then asked to pay cash up front.

“It wasn‚Äôt outrageously cheap, but it was a good deal,” said Trujillo.

The first day on the job, Beau told Denver7 things started to go wrong because the contractor was reckless with his tractor.

“He was scraping against it. I could hear it. I was in the house and I came out and my foundation was scratched,” said Trujillo.

There were many red flags but he still gave the contractor company the benefit of the doubt, even though the work was supposed to be finished in May, according to Trujillo.

“I was trying to get a job done. He said all the right things. I was getting receipts for everything and we had a contract,” said Trujillo.

Soon after, the contractor stopped showing up and kept giving excuses. Trujillo started researching and found several bad Google reviews including stories from others claiming they were scammed. On the Better Business Bureau‚Äôs website, the company had an F rating, but also one positive review.

The only response Trujillo could get from the contractor:

“They don’t owe me anything. The excavation cost more than they thought,” said Trujillo.

Contact7 tried reaching out by email and called several numbers listed on the website that had a few grammar errors. We reached a woman on one number who claimed to know nothing of the business.

For now, the job is unfinished and Beau is out of cash.

“It‚Äôs dirt and they laid gravel down and it‚Äôs just a mess,” said Trujillo.

He’s determined to warn others.

“I knew at that point, I‚Äôd probably never see that money again but I just wanted to make sure he didn’t do it to anybody else,” said Trujillo.

« Homearama Touring Edition begins this weekend with 7 new homes Buy a holiday home for ¬£10k: Julia Bradbury reveals she bought and renovated a picture-postcard pied-a-terre in … »