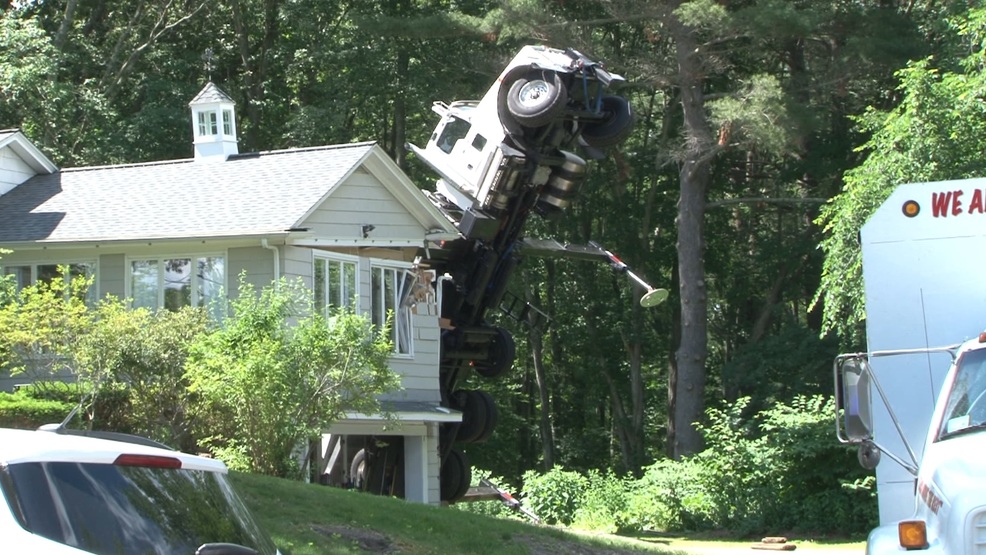 by JESSICA A. BOTELHO, NBC 10 NEWS

A crane tipped over and crashed into a home in North Smithfield while a tree-clearing company was cutting down trees Monday afternoon.

As the crane fell, one of the outriggers went through the corner of the house on Pound Hill Road around 2 p.m.

A viewer sent video to NBC 10 News, which shows the crane wedged into the home.

Photos also show damage to the house, including a gaping hole in the side of the structure, plus a few shattered windows.

As workers from Mike‚Äôs Professional Tree Service were clearing trees from the backyard, part of the crane went through the family room, where the homeowners were watching TV.

‚ÄúAll of a sudden, we hear this massive crash,‚ÄĚ said Fandetti, adding that he thinks the roof needs to be replaced. ‚ÄúIt felt like the house was just being destroyed all of a sudden. We ran, and this is what happened. The truck was upended, the crane was upended. The outrigger went right through the house.‚ÄĚ

Fandetti said he had just finished remodeling the room a few months ago.

Police said no one was hurt and the crane was later removed from the home. A crew was boarding up the hole left behind, with the town building inspector and OSHA evaluating the scene.

NBC 10 reached out to Mike‚Äôs Professional Tree Service, with the owner saying a piston on the outrigger failed, causing it to collapse into itself, and tipping the crane.

The owner, who also said he has been operating cranes for at least 25 years, said he has taken the crane for repairs.