Smoke billowed from an architectural landmark in Lake County Tuesday known for its unique design and accompanying moat as freighters attempted to extinguish the blaze.

The Gold Pyramid House, located at 37921 North Dilleys Road, in Wadsworth, was being doused with water from Gurnee firefighters‚Äô hoses shortly after 4:15 p.m. A man in a wheelchair was rescued from the fire. A dog died in the fire, a family friend told NBC 5.

‚ÄúWe did get reports also of a victim that was trapped,” Gurnee Battalion Chief David Douglass said.¬†“But upon our arrival that person was cleared and there was no rescue at that moment.‚ÄĚ

Firefighters used the water from the moat around the pyramid to put out the fire which took more than four hours. 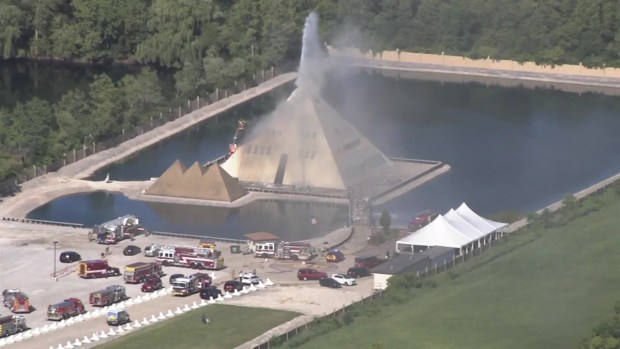 The notable building, modelled after an Egyptian pyramid, offers tours in the afternoon, according to its website.

It‚Äôs unclear if the Gold Pyramid is salvageable.

‚ÄúIt‚Äôs a pretty amazing place and even its on TV shows and everything, I hope they can rebuild it,” neighbor Sara Lerner said.

Firefighters are investigating a cause. Crews were remodeling the outside of the Pyramid when the fire started.