Homeowners say contractor took money and is ‘gone like the wind’ 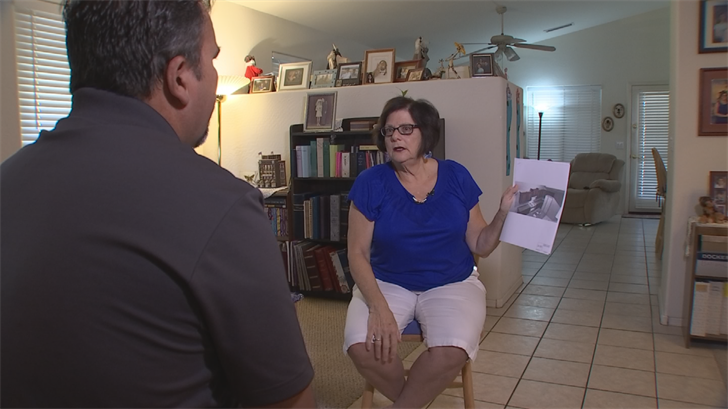 Anita Cappalla has a slow leak in her kitchen sink. It’s so slow, she didn’t even know the leak was there until her kitchen island started showing water damage.

‚ÄúWhen we had the leak, the water came up to here on both sides,‚ÄĚ Cappalla said as she showed 3 On Your Side the water damage.

[SPECIAL SECTION: 3 On Your Side]

Cappalla figured if she replaced the island, she might as well remodel her entire kitchen with new counter tops and cabinets as well.

So¬†she hired a company called CKBR which stands for Complete Kitchen and Bath Remodel. The company is run by a guy named Don Wilkerson.

Cappalla says she was impressed with some of Wilkerson’s ideas. And¬†after he provided her with designs of what her kitchen could look like, along with some other fancy company material, Cappalla handed Don Wilkerson a $4,882 check to start the $15,000 project.

3 On Your Side tried contacting Don Wilkerson numerous times, but when he never called us back we went to his business.

What we found was that Wilkerson and his company had been thrown out by the building’s landlord for reportedly not paying rent.

And¬†that’s when a woman named Libby Korneagay drove up. She’s another one of Don Wilkerson’s customers who came to CKBR to find out why he’s not returning her phone calls.

‚ÄúWhat was it about Don Wilkerson that you liked and that you decided to hire him?‚ÄĚ Harper asked. ‚ÄúWell, a couple of things,‚ÄĚ she said. ‚ÄúFirst, he was very cordial.”

But¬†on this day, Kornegay realized CKBR was permanently closed and that Don Wilkerson was nowhere to be found.

And in Kornegay‚Äôs case, she had already given Wilkerson more than $70,000 in checks for a major home remodeling project.

What kind of project? Well, so¬†extensive that Kornegay invited 3 On Your Side back to her house to show us the work that Don Wilkerson was paid to do, but abandoned.

“As you can see there‚Äôs not much here. My kitchen is basically a¬†microwave oven I put on top of a makeshift table so I can cook,‚ÄĚ she explained as she showed us inside her home.

Kornegay says Wilkerson put in new flooring. But¬†beyond that, she believes only about 25 percent of the total project has been completed although she’s paid Don Wilkerson more than $70,000. Keep in mind, the total cost of the entire project is around $95,000.

Although Don Wilkerson never did respond to 3 On Your Side’s inquires, he did text Libby a message recently saying, “Everything I have worked for is gone. They have pulled my license. The IRS took all my money.¬†I am locked out of my office.”

Turns out, they’re all true statements. The Arizona Registrar of Contractors recently suspended Don Wilkerson’s license after getting 21 consumer complaints.

And¬†we now know Wilkerson was thrown out of his office for reportedly not paying rent.

But¬†consumers like Cappalla and Kornegay say, that’s not their problem and believe Don Wilkerson took their money knowing he was going under.¬†

“He just needed money and other people’s money apparently,‚ÄĚ Cappalla said. ‚ÄúAnd¬†did what with it? Go on vacation? I have no explanation.”

The Arizona Registrar of Contractors says they are fully aware of the seriousness of the situation and are investigating. A spokesman tells 3 On Your Side that ‚Äú‚Ä¶this company (CKBR) is not working in the interest of public health, safety and welfare.‚ÄĚ

3 On Your Side will let you know what happens.