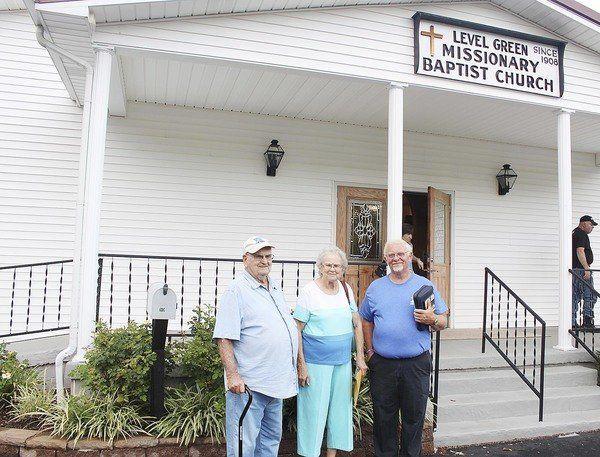 The building has undergone some changes, its founders have passed on years ago and the community has changed remarkably.

But the spirit that established Level Green Missionary Baptist Church as a beacon in its section of Keavy still lingers over a century after its origin in 1908. As the church members prepare for their annual Homecoming service this Sunday, Aug. 26, they celebrate 110 years of the church’s role in the community.

Serving God and sharing the gospel are the components of this white framed building nestled in the corner of Ky. 3434 and Auger Springs Road in southern Laurel County. Its history is rich with stories of days gone by, stories shared by the descendants of its founders, Bill and Dora Hale, as well as current members who were raised with the same spirit of love and community that defines the church.

Harley Hale and Virginia (Ginny) Bowling remember the stories told by their parents who built the church on the family property. Hale, now 94, still has vivid memories of the church in its earliest days and how it came to be at its current location.

“My dad, Bill Hale, bought 360 acres on Craigs Creek, because back then, everybody settled by water,” Hale explained. “Then they started digging wells and people moved out from the creeks. This area where the church is was woods and my dad bought it for about $5 an acre. Land was going for $5 to $8 an acre because that’s what property was worth back then.”

The Hales built their own home on that property and a few years later, constructed a church just a few yards away from their home. Although that house has long been gone, the church remained – also serving as a school during the week and a church for Sunday services.

“People met under a cliff on Auger Springs Road about three miles down the road,” Hale continued. “The cliff was just big enough to get under and only had a pulpit. The church was organized in 1908, but the building wasn’t built until 1913.”

That building, Hale said, sat in the middle of a pasture, separated from the cattle and hogs grazing in the field only by a fence.

“The hogs would get in and sleep under the church,” he laughed. “They’d be under there and squeal and we’d all say they were fighting over the corn.”

The original church had two doors at the front entrance that opened to three rows of seats inside. Long before electricity was common, the building offered three kerosene lanterns on each side of the building for light and a pot belly stove for heat.

“But once they started having funerals here, they had to redo the front and make one bigger door because the aisles were too narrow to get the casket in,” Hale explained. “They made the aisle wider – about six feet wide – and only had two rows of seats.”

People came from three or four miles away to attend church, he said, often riding in on horses or buggies. Hale said there were only about 15 families that lived in the area but children attended services with their parents because they had no other option.

“All the children went to church here – there was never a question about going to church. You did what your parents told you to do,” Hale said.

A preacher came only about once or twice a month to the church and during the harsh winter months, many were unable to weather the storms, causing the church to hold only Sunday School services.

“It’s hard for people now to understand what people of that time had to do to have church,” Hale added. “We had meetings back then with crowds of 30 to 65 or 70. Some churches only had meetings once or twice a month, but on the fifth Sunday, we’d have a big meeting with all the churches in the area and have dinner outside on the grounds. We didn’t have running water or electricity but we had his and her toilets! Nobody had money then, so they’d pay the preacher with corn, beans or stuff from their farms during the Depression. When we had a baptizing, people were baptized in Sulphur Spings off Indian Camp Road.”

The church building underwent some remodeling in the 1940s with additions being built around the original building. A hand crafterd model of the original church is carefully shielded inside a glass case, complete with pews and a pulpit that lifts up to show a baptistry underneath. Frank Larry Hughett, a native of the area, built the model and donated to the church in honor of the long history it has held in the area.

There were no Sunday School rooms in the church’s early days, with Hale explaining that the congregation would branch off into groups and would meet in each corner of the building.

Hale and Bowling remember many of the changes that evolved during their childhood, with cars being built and opening the avenues of transportation. Bowling remembers school being let out from the classrooms so the students could watch an airplane fly over the area.

“That was the first airplane to fly over this area,” she said. “I can remember them letting us go outside to watch it.”

The church was remodeled again around 1995, stretching its width horizontally to add more classrooms. That renovation resulted in the original building being dismantled and replaced with new materials. Several years later, a fellowship hall was added onto the back of the church – a donation from the daughter of a former pastor of the church.

“Lizzie Taylor donated $40,000 for the fellowship hall,” Hale said. “She didn’t even live in this area but her sisters went to church here and her grandfather, Merriam Tritt, pastored here.”

Just as rich in its history as the community where it was established, Level Green Missionary Baptist Church today. Since established in 1908, the church has had 40 different pastors, some of whom pastored at two separate times. The first pastor listed is James Witt, from 1908 to 1909. J.F. Karr, F. M. Truett, E. P. Brewer, Lewis Wyatt, Frank Manning and current pastor, Raymond Hampton, all served two stints as pastor. Hampton holds the record as the longest continous pastor, serving from 1993 through 2004 and returning in late 2012.

Although Hale and Bowling can testify to the changes in the church – and the world – during their lifetime, they do hold faith and family near and dear to their hearts – a characteristic that Hale feels is prevalent in the community.

“When the church was started, people actually cared about each other then,” he said. “And they still do here.”

The Homecoming service for Level Green Missionary Baptist Church will begin at 10:30 a.m. this Sunday, Aug. 26 and will feature special singers and dinner at the church. Pastor Raymond Hampton and the congregation invite the public to attend.

« Affordable Starter Homes in the St. Louis Area How to Get a Garage Loan (and Is It Worth It?) »