If “Property Brothers” proves anything, it’s that people can get stuck in big projects involving their home, and need help fromÂ Jonathan and Drew ScottÂ to get moving. The latest episode is a prime example of home buyers mired in renovation limbo. It’s where you start remodeling but, all too soon, progress grinds to a halt.

In the episode titled “Reno Interrupted,” we meet CanadiansÂ Janna and Larry, who bought a home to remodel … two years ago.Â Larry, a plumber, thought he could do the work himself, but he bit off more than he could chew. Furthermore, he and Janna were deadlocked after countless fights and disagreements, and that was just to get the demo done and strip the place down to the studs.

Meanwhile, they’ve beenÂ living with Janna’s parents, whose house is so crowded, the only space left for their toddler,Â Noah,Â is the small dining room. Janna and Larry have set up Noah’s toys, bed, and even the changing table in there, which kind of turns our stomachs. Diapers and dinner really don’t mix.

Now, Larry wants to find something turnkey that they can move right into and not have to fight about changes. But the couple areÂ also picky, so the Scott brothers struggle to find something that pleases them both. In the process, they deliver a a ton of smart real estate advice that could help other homeowners (and buyers) get unstuck, too. Read on!

Don’t pay more than a house is worth

Janna and Larry find one house they both like, and it’s listed for $769,000. Drew explains the sellers are likely trying to capitalize on the great neighborhood, and are asking too much. He encourages the couple to bid $740,000, which they do. The sellers counter at $760,000.

“Don’t let them creep above the value of the house,” Drew cautions, encouraging them to walk away. The bank won’t lend more than a house is worth anyway, so it’s unlikely they could get a mortgage on it at that price.

Rather than buying, consider renovating what you have

After a long and fruitless house hunt,Â the Scotts suggest revisiting the house the couple had started to renovate. After all, they already own the home.Â It is just the right size, is only five minutes from family, andâ€”get thisâ€”is now worth at least $100,000Â more than when they bought it two years ago, even stripped down to the studs. They wouldn’t even be able to afford it today!

Yet those two years of renovation limbo have given this couple a bad hangover.

Besides, this time, Jonathan could do all the reno work, so there would be nothing to fight over. Eventually the couple see the sense in this plan and decide to stay put. 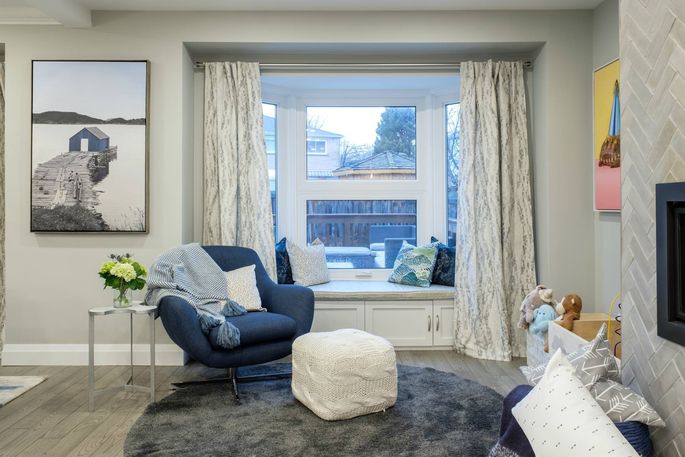 Jonathan Scott created a dream home the family never would have been able to afford otherwise.

Get support from a ‘sister’

Not only has the renovation been interrupted, the ceiling joists have been, too. Some worker cut big chunks out of one of the supporting ceiling joists to install ductwork, so the joist no longer supports the ceiling the way it should.

Jonathan tells the couple that they don’t have to replace that particular beamâ€”there’s room to run a “sister” joist alongside it and he can glue them together. That way they’ll be even stronger, and up to code.

Don’t skimp on the electrical

In the basement, Jonathan finds the fuse box has been jerry-built like crazy, with holes drilled in it and wires draped about like spaghetti. It’s going to cost $3,000 to replace it, Jonathan says, but it must be done, or else the whole house could burn down. There’s a good reason for most building codes.

Try a wooden screen on the stairwell

The basement staircase comes right up in the middle of the floor, and there needs to be something to keep people from falling down the stairwell. Instead of a pony wall or a railing that people could fall over, Jonathan suggests creating an attractive screen made of wooden slats that goes from floor to ceiling. That way light still comes in, but the stairwell is completely blocked off. 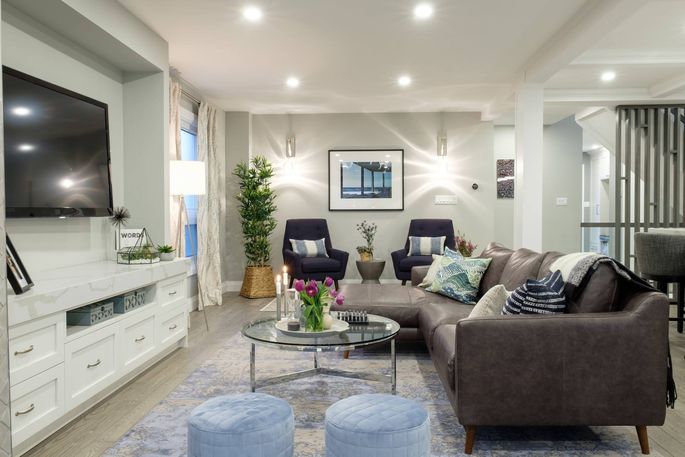 Note the screen on the far right.

Break up the backsplash

Jonathan suggests adding some novelty to the kitchen backsplash by using different tile, laid in a different direction, behind the stove. It looks terrific, is practical, and costs very little. 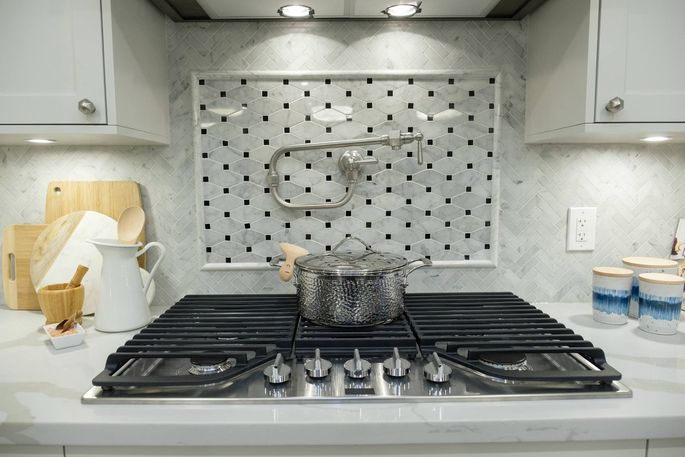 Radiant heating is not a last-minute addition

Janna decides she wants radiant floor heating in the entry hall. This is Canada, after all, and it can be wicked cold outside. Good thing she decided on that just minutesÂ before the tile was laid, or they would have had to dig it up. If she had waited a few more hours, the new tile would have been toast.

Do the Scott brothers deliver?

Larry and Janna are overwhelmed by the changes Drew and Jonathan Scott made to their home.

The couple are ecstatic, because they know they have a much better home than they ever would have been able to afford otherwise. And Janna’s parents are happy as wellâ€”no more diaper changes in the dining room. Phew! 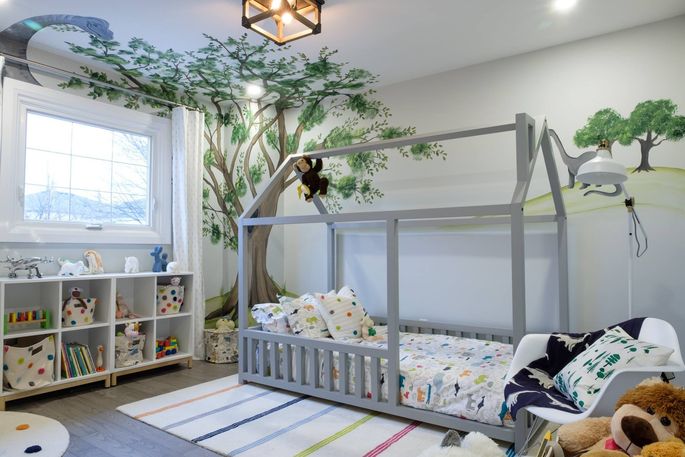 Now Noah has his own room, and doesn’t have to sleep in the dining room.