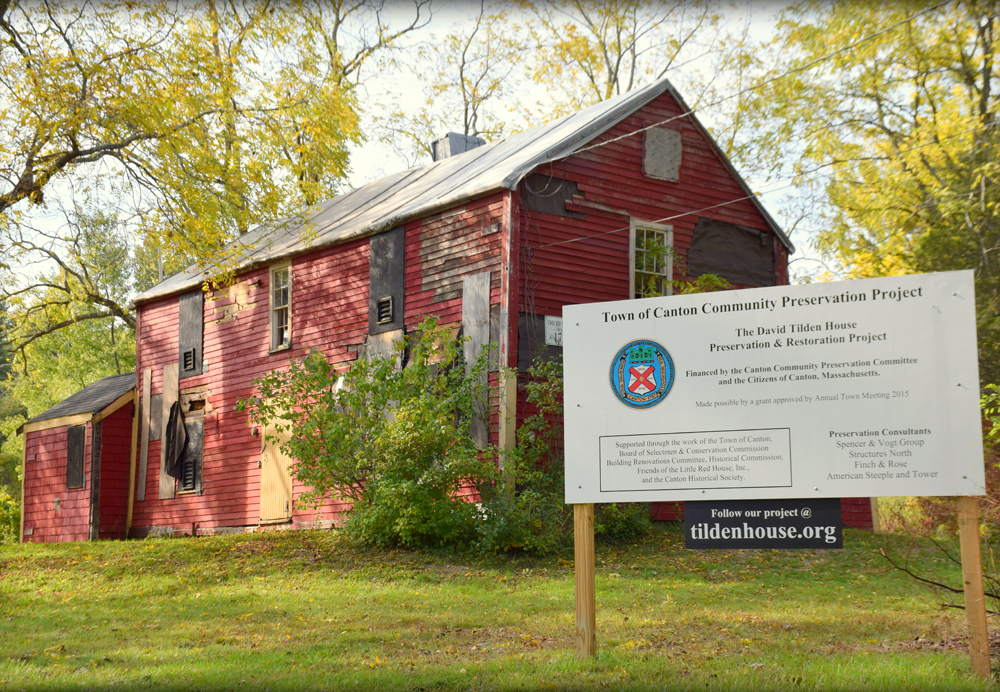 Preservation of the David Tilden House at Pequitside Farm will proceed with financial assistance from public and private sources. (Moira Sweetland photo)

Nearly two weeks after delivering a final state spending plan to the desk of Governor Charlie Baker, the Massachusetts legislature voted last week to override all but one of the governorŌĆÖs budget vetoes for FY 2019 ŌĆö preserving millions in local earmarks, including $100,000 for the preservation of CantonŌĆÖs historic David Tilden House.

The funding for the 18th century wood frame house, known locally as the Little Red House, was included as a budget amendment by state Rep. Bill Galvin and passed by both houses of the legislature. The funds were then subsequently vetoed by the governor before being restored by a vote of the legislature a short time later.

The $100,000 from the state is in addition to a $50,000 grant that the project recently received from the Mass. Historical Commission. That funding, together with $362,000 remaining from Community Preservation Act (CPA) grants and $25,000 in private donations, will be used to renovate and preserve the structure under the leadership of the nonprofit Canton Historical Society, which is leasing the property from the town for a period of at least 25 years.

In addition to securing funds for the Tilden House, Galvin also filed successful budget amendments for the operation of the Blue Hill Observatory and Science Center ($100,000), the Norfolk County Fire and Rescue Dispatch ($100,000), and the Pappas Rehabilitation Hospital for ChildrenŌĆÖs Summer Program ($100,000).

In terms of overall state aid to the town, Canton will receive $6.1 million for education and $2.2 million in Unrestricted General Government Aid for FY19, representing an increase of $1.7 million over FY18.

ŌĆ£I am pleased that we were able to deliver a balanced budget that does not raise any taxes or fees while funding vital programs and increasing funding for education and local aid,ŌĆØ said Galvin.

ŌĆ£The Blue Hills Trailside Museum is a gem for the community and is enjoyed by residents from the surrounding communities,ŌĆØ noted Timilty. ŌĆ£It has been a pleasure working in collaboration with Representative Galvin. Together we were able to secure funding for essential services and projects improving both the safety and quality of life in the great community of Canton.ŌĆØ

The legislature approved an unprecedented $4.9 billion in Chapter 70 education funding, which represents an increase of 3.4 percent over the previous fiscal year and is a billion dollar increase since 2011. This includes $319.4 million for the Special Education Circuit Breaker, $90 million for charter school reimbursement, $68.9 million for regional school transportation, and $5 million to fund the Preschool Partnership Initiative.┬ĀAdditionally, funding for teacher health care costs will increase by $39 million.

In addition, the budget includes the following:

* $88 million to Regional Transit Authorities across Massachusetts to ensure that residents have access to reliable and affordable transportation.

* Deposit of $367 million into the stateŌĆÖs ŌĆ£rainy day fund,ŌĆØ bringing the total to nearly $2 billion.