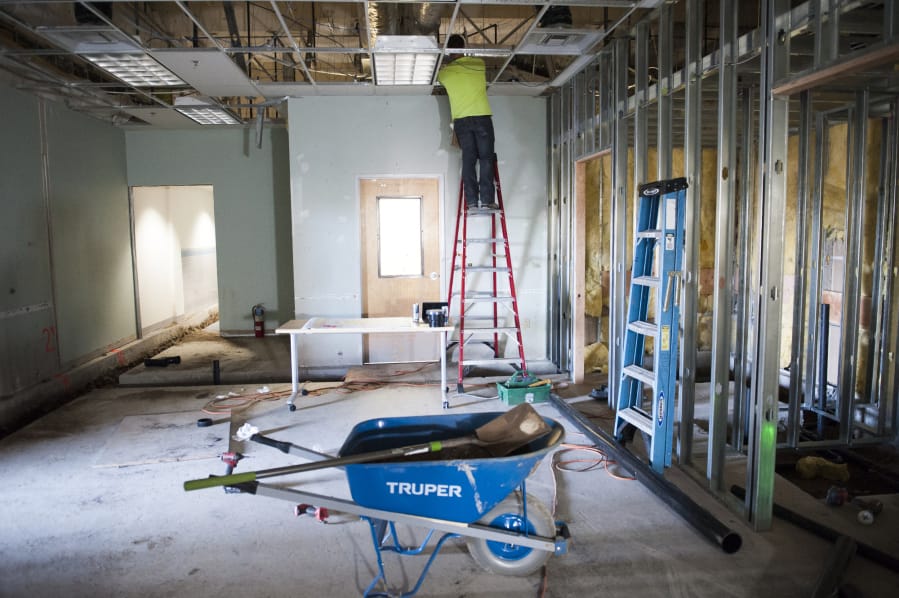 Vancouver‚Äôs day center has a new name to go with its new look. The day-use facility for homeless, located in the former Washington Department of Fish and Wildlife building, will be known as the Vancouver Navigation Center.‚ÄúNavigation Center is a more up-and-coming way to help folks who are homeless, it helps them navigate from the streets to housing services,‚ÄĚ said Peggy Sheehan, Vancouver‚Äôs community and economic development programs manager.The day center will use 5,000 square feet of the 26,578-square-foot building at 2018 Grand Blvd., purchased by the city for $4.3 million last year.Construction got underway three weeks ago, and things are progressing unusually quickly for a project of this size.Michael Parshall, principal with Woodblock Architecture, attributes the speed to unwavering support from community partners. The Portland-based firm began drawing plans earlier this summer and has donated about $50,000 in services so far.Now, most of the plumbing and stud work is completed for six new showers and bathrooms, as well as a laundry facility that will feature six sets of washers and dryers.‚ÄúMost of our work is actually in this area,‚ÄĚ said Kris Simensen, director of construction for James E. John, which is providing pro bono construction services.The rest of the space requires minimal work, allowing the bulk of the $500,000 budget to be spent on showers and bathrooms.As it stands, construction is set to wrap up Nov. 9.‚ÄúWe‚Äôre tracking well with that timeline so I think that, depending on how much time Share needs on their end, Thanksgiving is absolutely doable (to open the center‚Äôs doors),‚ÄĚ Simensen said.Private funding also pushed the project forward.Jennifer Rhoads, president of the Community Foundation for Southwest Washington, said once the first investor stepped up, it was easier to attract others and fund the project in its entirety.In April, C.E. John pledged $150,000 for renovations and an additional $30,000 annually for the next five years to help fund operational costs. The donation began when Mark Osborne, C.E. John‚Äôs vice president of leasing, called Rhoads in search of a worthy community project to support. The company was wrapping up a new teen center for the Boys & Girls Clubs of Southwest Washington and looking for its next philanthropic endeavor.‚ÄúIt was easy because they knew what they wanted to support, and we just happened to know about this project bubbling up,‚ÄĚ Rhoads said. ‚ÄúIt was the right time, right place.‚ÄĚThe Ed and Dollie Lynch Fund donated $300,000, and the Mason E. Nolan Charitable Fund gave $50,000 toward labor and materials.Osborne is hoping other organizations will invest in the Vancouver Navigation Center as it continues to grow. He sees his contribution as an investment for his business and the community.‚ÄúHomelessness is definitely a big issue in Clark County. You can see what happens when it gets out of control,‚ÄĚ he said. ‚ÄúPortland is out of control. It‚Äôs not good for the community, it‚Äôs not good for business and it‚Äôs not good for the homeless.‚ÄĚSheehan said future plans for the remaining space aren‚Äôt set, but the Vancouver City Council had previously expressed interest in a women‚Äôs shelter. The city may use a portion of the site for a severe weather overflow shelter staffed by Share.‚ÄúThe goal is we have to figure out the needs of the community and what‚Äôs going to work well with the day center,‚ÄĚ Sheehan said.Current plans include on-site storage, dog kennels and a covered patio. The city has also offered to pay for a security officer to patrol during operating hours.The city is using a $145,000 grant from the Washington State Department of Commerce, $25,000 from BNSF Railway Foundation and approximately $180,000 in general fund money to renovate the property‚Äôs exterior.Improvements include a new fence with gate access, resurfacing the parking lot, landscaping, taking down the old Fish and Wildlife sign and a fresh coat of paint.¬†Source: https://www.columbian.com/news/2018/sep/07/day-center-becomes-vancouver-navigation-center/