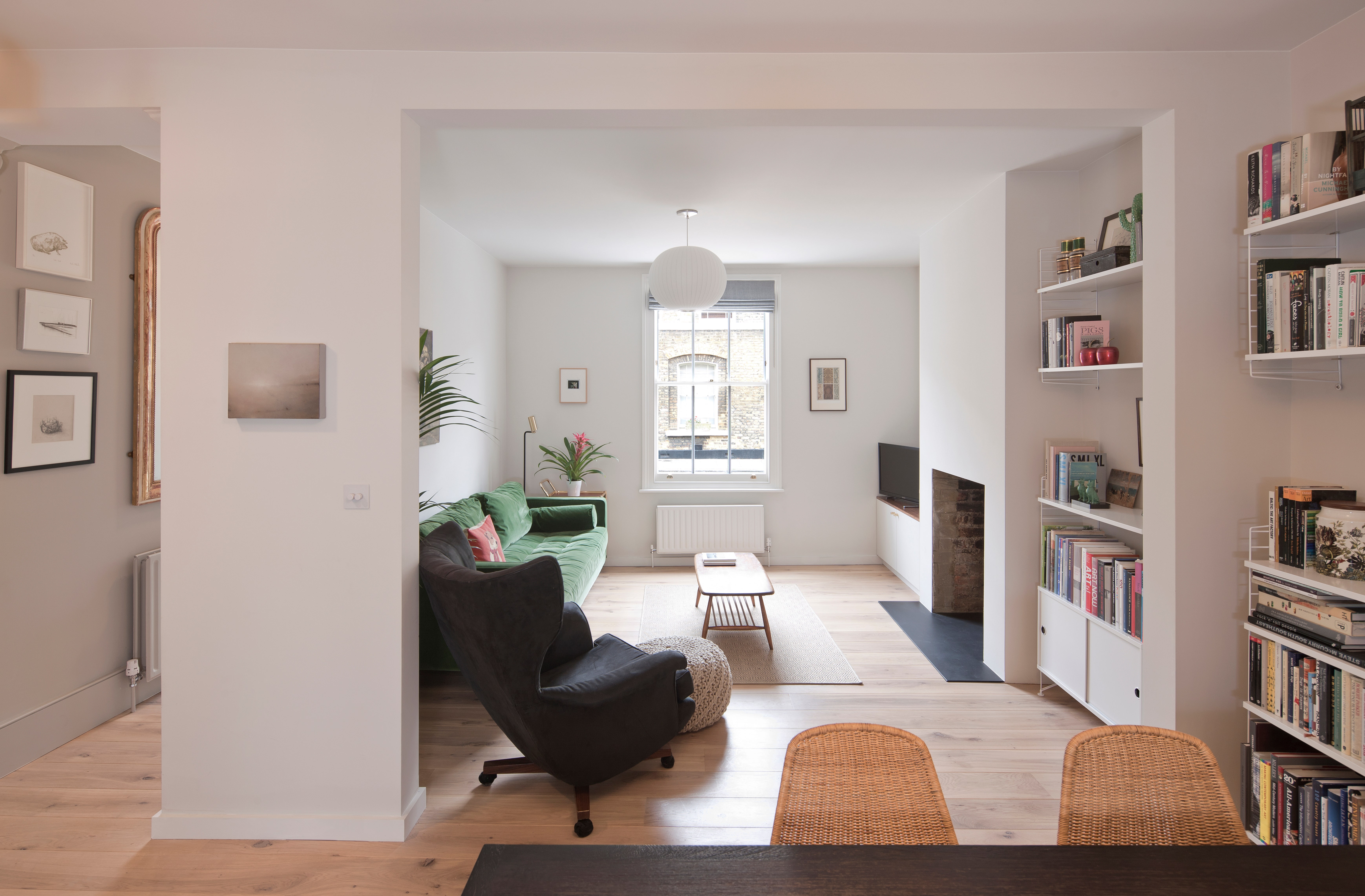 Perhaps the least appealing of homes are those that have recently been inhabited by students. (Sorry, studentsā€”you’re slobs.) It is really a wonder that architect Stuart Archer was able to see past the dark, dingy corridors and “horrific burns and stains” on the ceiling of this East London rowhouse that had been rented out to university-goers for years. Originally built in the late 19th century, it was situated within a pocket of buildings that had survived the World War II bombings in the area, so there was not just history but character to spare in the Early Victorian and Late Georgian architecture of the block. (“They’re literally filming The Crown on the end of our street,” Stuart tells me over the phone.) Plus, he and his wife had fallen in love with the diversity of the neighborhood, Stepney, a mix of “the Old East End Cockneys, council housing, older people, younger people moving in, and a huge Bengali population.” So even though the house sported rust-colored carpets and textured wallsā€”it hadn’t been renovated since the ’70sā€”they bought it and moved right in. “Then we sat for two years going back and forth on what to do with the place,” says Stuart, who had founded his design firm Archer + Braun just before moving in.

After: The front of the house, post-renovation.

Eventually, they mustered the courage (and the funds) to work with the local planners to figure out how the historically designated property could be renovated. Order of business number one was dealing with the footprint: Originally, Stuart says, their block was built as homes for poor dockworkers, so the footprints are quite small, with lots of partitions throughout the interior. In order to make the space more livable for their growing family, the couple proposed a 100-square-foot addition out back, an extension to the kitchen that would reclaim a bit of unused patio space. “We wanted it to be modern, contemporary, but in brick and contextual,” Stuart says, so they designed a pitched roof to match the neighboring architecture and then selected a nearly black brick for the walls. Inside, what was once a tight galley kitchen slash hallway to the back door is now sunlit and open, with a picture window so you can peer through to the dining room. They removed doors and widened openings to allow for easier flow through the home; saved a heap by using IKEA cabinets and builder-grade windows and bricks; and then spent the bulk of their budget on finishes and furniture. “Distract people with fancy furniture,” says the architect.

Before: The front room featured a textured ceiling and walls, dark carpet, and a doorway that led to a very dark entryway.

After: By sealing up that door and replacing it with a picture window (barely visible above the couch), they cut off awkward an awkward traffic route from the entrance. The window was fabricated in black walnut veneer by one of Stuart’s best friends, a picture framer.

Before: A dated fireplace anchored the other side of the living room.

After: When Stuart says they “didn’t do a huge amount” to the fireplace, he means they ripped out the faux marble, replastered, exposed the brick, and then put in a new slate hearth flush with their wood floors. (No biggie!) It strikes that clean but historical note that they were aiming for with the addition.

Before: A side patio off the rear of the house went underutilized the first two years they lived there (and yes, that’s how the neighbor painted his house whiteā€”right down the middle of the building).

After: By reclaiming that little alleyway for the interior, they nearly doubled the size of the kitchen. Plus, Stuart says, it actually makes the patio feel larger, as before it was kind of a dead zone. To save money, they used black engineering bricks on the exterior. “Theyā€™re dirt dirt cheap,” Stuart says. “Theyā€™re what you use underground because theyā€™re frost resistant.” But the color worked, so they matched the windows and trim to integrate.

After: Inside, the kitchen is lit by a large skylight, and another large picture window allows sunlight to flood into the dining and living rooms. Cabinets are IKEA with Superfront doors. “You know what, the most ridiculously expensive thing in the whole house is the black tap,” Stuart laughs.

Before: A narrow galley kitchen also served as the rear exit to the patio.

After: When they did the addition, the couple also removed the interior wall that would have separated it from the original kitchen. Result? Big, sunny, open kitchen of dreams. A Victorian work table acts as an island but can be moved, should they ever want the room to function differently.

Before: The upstairs bedrooms were functional but lackluster.

After: They ripped everything out of the upstairs to give the bedrooms a fresh startā€”though the final coat of paint, window treatments, and smart furniture certainly help it match the aesthetic of the rest of the house.

« Seven tips for creating a classic look at home How to make your property renovation a success: We reveal five top tips to turn a profit from a fixer-upper »