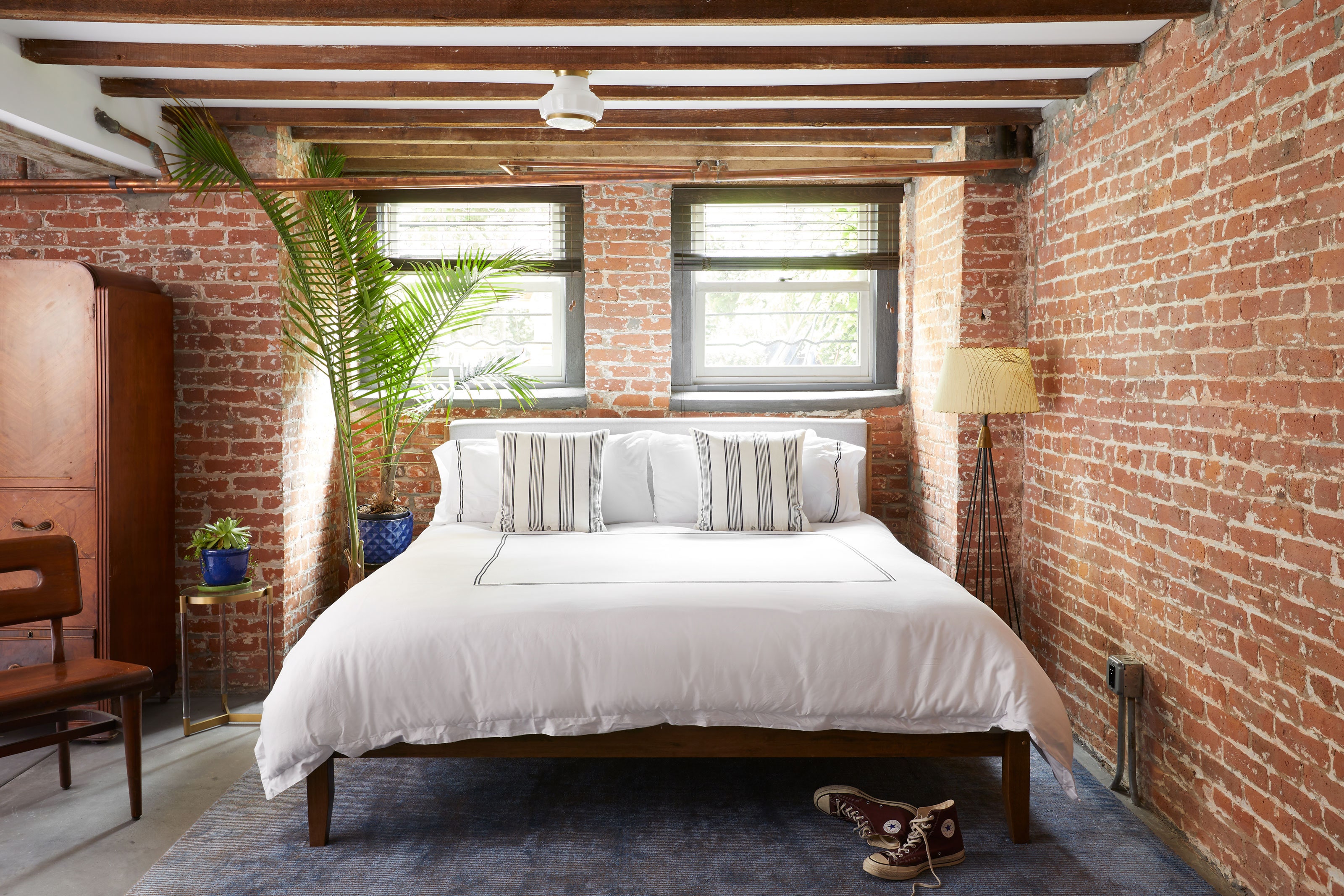 Architectural Digest visuals director Michael Shome and Corcoran real-estate broker Justin Dupree decorated the top two floors of their Brooklyn townhouse over the span of more than a decade. “Designing our home was a very slow process,” says Michael. But then the couple decided to renovate the garden level‚ÄĒa cluster of claustrophobic rooms outfitted with linoleum floors, cinder block walls, and drop ceilings‚ÄĒin one fell swoop. “It‚Äôs really difficult when you have such a large space that you need to furnish all at once,” Michael admits. “So, Justin and I approached it as: This is a different floor. The main floor and second floor work together in terms of them being vintage eclectic. The garden level is more of a modern take on things. For us, that meant it was okay to get everything all at once.”

“It was scary,” Michael says of the garden level before the reno. “The windows were fully blocked off behind a wall.”

Justin and Michael had happily used the basement solely as storage for years. Then their son Oliver came into the picture and the additional space took on new importance. ‚ÄúI wouldn‚Äôt say our house is formal, but it‚Äôs not super comfortable either. In fact, the majority of our leisure time was spent in our bedroom, watching a movie snuggled up in bed. Which is fun for the two of us, but the reality is, as your family grows, your needs change,‚ÄĚ says Michael. ‚ÄúWhat we really wanted was a space where we could spread out and be comfortable. We wanted a space both for Oliver to play and for us all to enjoy together.‚ÄĚ

While the couple had a strong creative vision for the space‚ÄĒloftlike, a little bit industrial, a lot cozy‚ÄĒthey needed help with the logistics. Enter contractor Alex Garcia of AG Home Improvement, who quickly assessed what could and couldn‚Äôt be done. Ultimately, the to-do list included knocking down the interior walls to create one giant, open room; raising those superlow ceilings; stripping layers of gloppy white paint off the brick walls; and redoing the bumpy floors in (heated!) concrete. Read on to find out how it all went down.

The best surprise happened during demo: The drop ceilings had to go because they made the garden level feel even more basement-like. But demo-ing them revealed another game-changing design element: original wood beams. ‚ÄúWhen we saw them, that‚Äôs when we were like, ‚ÄėOh, can we keep those?‚Äô Optically, they elongate the room. It‚Äôs almost shiplike,‚ÄĚ says Michael.

They ditched radiators for floor heating: Michael dreamed of terrazzo floors, but that was out of the budget. Instead, the couple went with poured concrete‚ÄĒpoured concrete that’s heated underneath. “It was recommended in terms of the energy efficiency of it, but also, instead of chopping up the space with these big radiators‚ÄĒwe would’ve had to have them every six feet‚ÄĒit was a way to make the space a clean slate,” says Justin.

What they couldn’t remove, they hid in plain sight: “The fact is, this is a garden level with a lot of electrical things. You can only move so much,” says Michael. Unfortunately, the ugly electric meter near the front windows had to stay where it was. A folding screen would’ve concealed it‚Ä¶and also called unwanted attention to that corner. No thanks. “Against our grain, we found some artificial plants that look really real,” Michael explains. “The key thing is to mix them with real plants.” Now, the meter fades into the background.

Their new sofa required some surgery: At the top of Justin and Michael’s shopping list was a cushy, oversize sectional sofa for the living area. They beelined it to the Mitchell Gold + Bob Williams showroom and quickly fell in love with a gray velvet number. But when the sofa arrived, it didn’t fit in the door. “I totally goofed. We thought we measured properly, but it turns out the measurements were wrong! We were off by half an inch,” says Michael. Thankfully, the company’s white-glove delivery service took it in stride, calling the New York Couch Doctor to come and saw the sofa into pieces, then put it all back together once it was in the right spot. “I was also super doubtful, thinking it was never going to get down there,” says Justin “But they were really quick and professional about it.” As for any surgical scars, “you would never know!” Michael says.

The whole floor is inspired by‚Ä¶a rug: “We got the blue rugs from Houzz before we got any other furnishings,” says Michael. “My mother goes, ‘That‚Äôs like buying the shoes before you buy the dress!’ I didn‚Äôt want to admit it, but she was kind of right. But I felt like, you always need something to inspire the rest of your design. Sometimes people design a room around a piece of artwork. For us, it was the rugs.” The couple ended up buying four identical ones that span the space front to back. Wall-to-wall carpeting didn’t seem smart in case of flooding (it’s the ground level, after all) and it felt like a waste to totally cover up those new concrete floors.

They took the bathroom tile to a whole new level‚ÄĒliterally: Even though the bathroom is windowless and on the small side, Justin wanted it to feel like a spa. They covered every surface‚ÄĒeven the ceiling!‚ÄĒin white subway tile to give it a serene, airy feel. It also happened to be a practical design decision. “There‚Äôs not a lot of exhaust options down there, so we thought it would be a good way to avoid issues with humidity like peeling paint or mold,” Justin explains.

They found kids’ stuff that’s not totally hideous: Justin and Michael purposefully left the middle section of the garden level open as a flexible play space for Oliver‚ÄĒbut that didn’t mean they wanted it to be overrun by garish, plastic children’s furniture. “We looked high and low for something that was made out of wood and had a little bit of a design aesthetic,” says Michael. They ended up finding this table and chairs combo on Amazon.

« What’s up this weekend: Things to do, places to go in Pensacola, Aug. 17-19 Tips to consider before tackling home renovation »