A brick by brick renovation

Rain fell so fiercely the day concrete steps were poured for Andrew Tripe and Carolyn Nicklin’s Whanganui house that parts of the surrounding town flooded. It was already a lousy winter to renovate â€“ the wettest on record â€“ but June 2015 was especially memorable.

During this particular deluge, the city’s iconic river burst its banks and builders working on the couple’s hillside family home insisted Andrew sign a waiver absolving them if the concrete failed to set.

A faint outline of raindrops remains etched into the internal step that connects an original section of the house with a new addition. “It’s all part of the story,” Andrew says, shrugging off the imperfection. 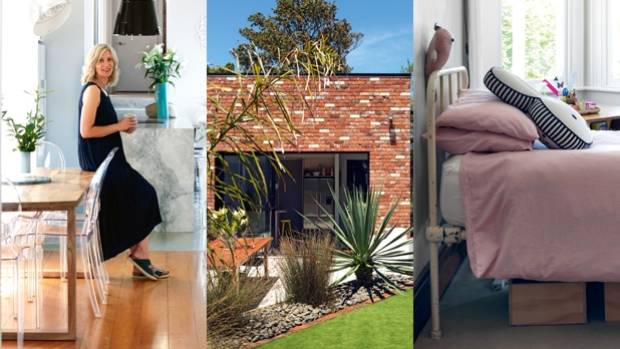 A deluge nearly derailed the Tripe-Nicklin family’s renovation, but they say the end result was well worth all the hard work.

And this home has gathered plenty of tales, including several revealed by an elderly stranger who knocked on the door and explained he had lived in the house as a boy. As he told it, a .22 rifle was once used to rid the chimney of a possum, and the mysterious adjacent building was not the schoolhouse the family had thought but a billiard room built in 1912, complete with reinforced floor and a viewing platform for observers.

READ MORE:
* The secrets of renovating a home
* What years of watching reno shows has done
*Â Worst renovations when you want a return for your money
*Â The best renovation projects to consider before you sell
*Â 10 tips for a budget-friendly kitchen renovation
*Â Five ways to add value to your home

The Nicklin-Tripe chapter of the story began in Mangawhai Heads where the couple lived before moving to Melbourne, Australia with their children Jonty, now 14, Theo, 12, and Phoebe, nine.

Carolyn relishes the kitchen after a tough renovation: â€śAt one stage we were cooking on a gas barbecue. And we couldnâ€™t use the toaster at the same time as the microwave or jug.â€ť

Former Whanganui farm boy Andrew had no plans to return to his roots until a family Christmas visit with his father in 2009. They were already feeling a pull back across the Tasman and considering raising their offspring in a smaller, quieter place. With a start, they realised they had found what they were looking for in Whanganui.

“This city ticks all the boxes,” Andrew says. “It’s a brilliant place to raise a family and have a fantastic, easy lifestyle. The schools are among the best in New Zealand, it has a sense of history and heritage.”

Within months, they had located a section beside Virginia Lake, bought it by phone from Melbourne, moved the family into a Whanganui rental property and engaged an architect.

Soon after, they realised their building plans were not the best option. The section that had seemed generous by Melbourne standards felt increasingly inadequate for three growing children, two of whom were sports-mad boys.

So when this old villa in St Johns Hill appeared on the market, they pounced. The four-bedroom, 3.5-bathroom property included sprawling 5500sqm grounds with a tennis court, pool and a rabbit hutch.

Renovation discussions began immediately. Carolyn, who designs jewellery that she sells through Whanganui’s Sarjeant Gallery, had quite grand ideas regarding the renovation and wanted to finish everything before they moved in. Management consultant Andrew, meanwhile, was sticking by his favourite Latin proverb: festina lente, make haste slowly.

This is a Sticky Lamp by Droog Design in Theoâ€™s bedroom,â€ť says Carolyn. â€śWe purchased the lamps in Melbourne and they just stick on the wall with an adhesive pad on the back â€“ very cool.â€ť

In retrospect, Carolyn agrees they needed to think carefully about their alterations. However, there was no question the unusual bathroom off the master bedroom needed to change: access to the so-called en suite was through an exterior door. Then a tiny low-ceilinged room full of rabbit food was converted to a walk in wardrobe, before they polished the kauri floorboards, tore down shredded curtains and repainted.Â

The formal dining room, on the other hand, demanded preservation so they eventually converted the space to an office and library.

Andrew Tripe and Carolyn Nicklin worked closely with Black Pine Architects and builder Tarf from Renoman Builders to create the glass walkway and brick cube addition to their Whanganui villa; during construction, the coupleâ€™s three children and neighbourhood kids formed a human chain to move the bricks across the building site.

Although there was nothing charming about the existing draughty, lean-to kitchen, a series of unexpected delays meant they lived with it for three years. During that time, only one stove element worked properly, a second element operated only on maximum and the cook had to lean on the oven door to keep it closed.

“On a winter’s day it would be two or three degrees Celsius in there and the wind would whistle through it,” Carolyn says. “Every winter I said I’m never doing another winter in this kitchen. It’s amazing what you can learn to live with.”

After much discussion, the couple decided the best way to integrate the new kitchen with the rest of the house was to opt for blatant contrast. Having realised the chimney was an earthquake risk, they hit on the idea of reusing the bricks to encase the kitchen and dining area in a kind of brick cube.

From the driveway the original features of the 1908 villa can be seen.

Andrew, who remembers visiting brickworks with his grandfather at age five, knew they would have no trouble sourcing more bricks locally.

But first they had to scrub them clean. “We did it the first time, and then, because of all the delays, they got mould on them and we had to do it again,” says Carolyn. “It was one of the hardest, skin-tearing, back-breaking jobs.”

To them, the resulting structure was absolutely worth the pain. “We love it,” says Carolyn. “I love the way it connects the house. It’s a piece of art in itself.”

A hanging chair in Jontyâ€™s room is used for quiet time with a good book.

Whanganui is special: It’s a very creative town, from an arts, intellect and business sense. It has a rich sporting history and heritage feel with arguably the best preserved town centre in New Zealand. And I see some amazing stuff going on here, companies supplying amazing niche products to the world: Q-West provides Fullers with its boats, Tasman Tanning supplies leather car seats to Audi, and fire and emergency crews worldwide use safety helmets by Pacific Helmets. (Andrew)

Moving to a smaller centre: Has been incredibly easy. The kids have really prospered here and on the very first day at school one of the mothers said, ‘Would you like to join our coffee group?’ We still meet every Friday. (Carolyn)

Andrew Tripe and Carolyn Nicklin with Jonty, Theo and Phoebe.

Renovating a villa: I think its possible to mix old with very new, to go to the extremes. The original beautiful wooden ceiling in the lounge cleverly connects to the modern ceiling in the dining room. (Carolyn)

On the left is a Ross Mitchell-Anyon vase, and the tea set is made from old doilies by artist Judy McIntyre. â€śThe tea set is practically indestructible,â€ť says Andrew, â€śwhich is handy when Vegas the cat jumps on the table.â€ť

Phoebeâ€™s room was the original parlour and has plenty of play space and room for her art table.

The dining room connects the formal lounge with the new kitchen addition; the elm table was made by local builder and furniture maker Tom Francis; Kartell chairs and an Arco floor lamp complete the space.

Former occupational therapist Carolyn in her workroom; she and a friend started their jewellery business Knock-Knock Design three years ago.

An artwork by Fleur Wickes on display in the formal lounge; a BoConcept sofa fits the whole family for movie night (and for watching cricket and rugby).

The rimu-lined former billiards room is fitted with built-in beds and is used as the kidsâ€™ hangout.

The addition to the house steps down into the kitchen via a glass-panelled walkway.

The granite kitchen island doubles as a homework zone and a space for playing cards after dinner; the yellow Tim Webber stool is Vegas the catâ€™s launch pad onto the island.

A collection of objects beneath a Jodi Clark artwork.

« BAY AREA LIFE: 7 tips for remodeling! 7 Simple Tips for Selling House As Is Profitably (And Fast) »