NJ home makeover: A sleek new kitchen made for entertaining

Don Everything, remodeling ideas for kitchens 0 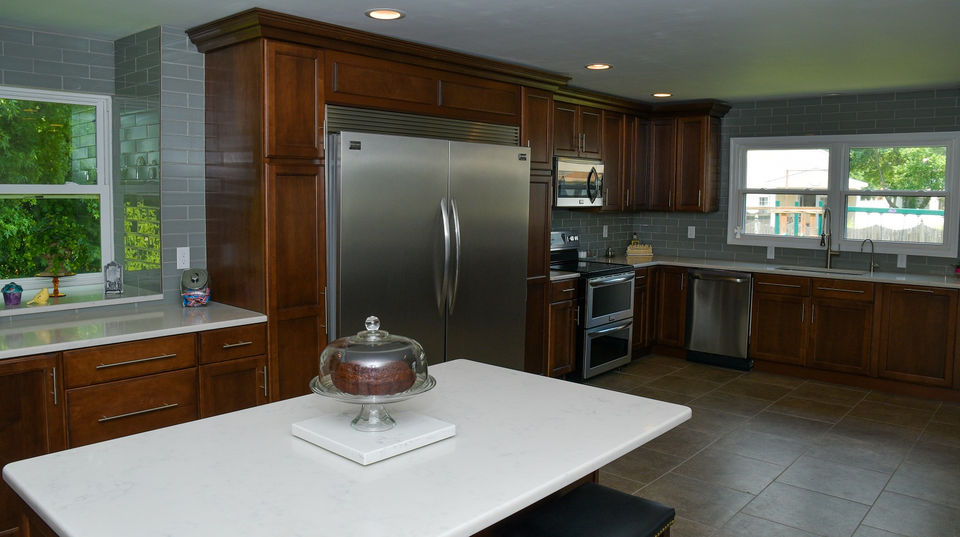 N.J. home makeover is a regular feature on NJ.com that showcases designer, contractor and DIY renovations, large and small. To submit your renovation for consideration, email home@starledger.com with your full name, email address, phone number and town/city. Attach “before” and “after” photos of what you renovated.

Mario and Fran Marchetti will never know how long the dishwasher was leaking in the kitchen of their 1990 Colonial-style home in Washington Township.

In a house without a basement, the leak was impossible to detect until the February 2016 day when the linoleum floor sunk beneath Fran’s Marchetti’s foot as she was removing dishes from the faulty appliance.

“I thought we had termintes,” she said. “I had never seen even a drop of water in front of the dishwasher.” The extensive water damage was a surprise that would require a costly repair. “We had to replace the subfloor.”

With the extensive work that would be required, the couple decided it was also time to renovate the kitchen in their home of 11 years. “I wanted a new kitchen, but that’s not the way I wanted to go about it,” Marchetti said. “It forced us to think about it before we were ready. We had never done anything like this before, so we were nervous.”

They decided to go with Floors Just for You of Turnersville because one of its owners is a childhood friend that Marchetti knew she could trust.

Maura Midili, lead designer for the company, which also remodels kitchens and bathrooms, had ideas that would totally reorganize the kitchen. They would create Fran’s dream space for baking, storage, entertaining and housing an area to stock breakfast and snack foods for their son, 16, and two daughters, 13 and 8.

The project would involve removing a wall to take space from an adjaecent dining room that had been used as a play area. Appliances and fixtures would be relocated, and areas for food prep, serving and dining would be expanded with additional cabinetry, including a peninsula and a small island. Where there had been a sink and a window that looked out to the backyard, they’d cut through the wall to make way for access to the yard through sliding glass doors. Another window would be removed to make wall space for the new range and hood.

“It was a big undertaking,” Midili said. “We literally removed her kitchen completely and put it in a different part of her home. She gave me a very lengthy wish list, and we fit everything she wanted into this kitchen.”

Fran Marchetti says the reorganized and renovated kitchen makes it easier to keep things in order while designating spaces for kitchen tasks and activities. In addition to the cabinet pull-outs that allow her children to serve themselves, she gained a counter niche between two tall cabinets for mixing batter or kneading, rolling out and shaping dough.

“It’s probably my favorite feature,” she says of the baking prep area, which also includes a cabinet with a lift that brings her KitchenAid mixer to work height with a dedicated electrical outlet. It’s an accessory feature of the Kemper brand cabinetry they selected.

To the right of the baking area is the kitchen’s focal point, flanked by two tall pantry cabinets. From Frigidaire’s Gallery Collection, a full refrigerator and a full upright freezer are united as one expansive whole by a matching stainless steel trim kit.

In addition to her immediate family of five, Marchetti says they often entertain extended family and friends. With their two-story home’s original layout, guests in the family room had seemed isolated from those in the kitchen. “I’d feel like there were two parties going on,” she says.

With the kitchen’s original stove removed, a large, window-like opening could be made in the wall to allow views and conversation between the two rooms. Where the old refrigerator and cabinets had been, the family gained a broom closet to store cleaning supplies and a corner cabinet with a wall-mounted television above.

“Now there is a place for everything, and I don’t have to dig,” Marchetti says. “Everything is just right there.”

The kitchen and dining area were enlarged and renovated in a two-story, 1990 Colonial-style home in Washington Township (Gloucester County). The four-bedroom, two-and-a-half bathroom home had its original kitchen.

Who did the work

Floors Just For You of Turnersville

How long it took Â

About six months, including planning. The project was completed by July 26, 2016.

What they spent Â

Quartz counters, two-part refrigerator and freezer, cabinetry and associated accessories including roll-out storage, a dedicated mixer cabinet with a shelf lift that brings the appliance to work height.

They limited the amount of decorative molding used in the kitchen and got a good price on their two-piece Frigidaire refrigerator and freezer.

“Everything,” says Fran Marchetti. “The layout is so functional.”

What they’d have done differently