Commissioners get earful on property valuations 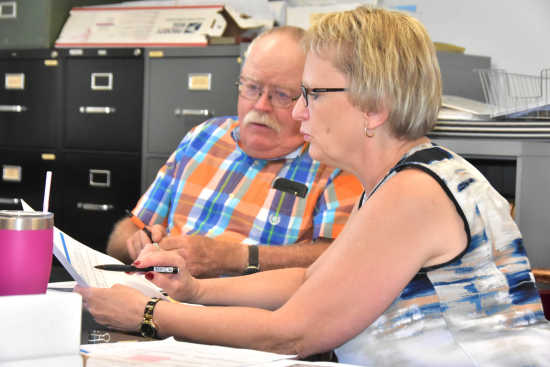 McCOOK, Neb. ‚Äî Red Willow County commissioners who listened Monday afternoon to property owners protest their homes‚Äô property valuation assured them that none of them are writing the rules.

‚ÄúNo one in this room made the rules,‚Äù commissioner and board of equalization chairman Steve Downer told several homeowners who are upset ‚Äî ‚ÄúI‚Äôm mad ‚Ä¶ mad,‚Äù one said ‚Äî about the property valuation that will determine their tax bills after levies are set in October.

And Downer added, ‚ÄúNo one in this room is making these rules. We‚Äôre just trying to abide by them.‚Äù

Downer, Riener and Earl McNutt started annual protest hearings Monday afternoon after they met as a board of commissioners Monday morning.

The first protester was near tears, telling how she‚Äôs dealing with leaky egress windows, water in her basement and an obstinate ex-husband.

‚ÄúThere‚Äôs work that needs to be done in my house. Because of my health and disabilities, I‚Äôm not able to do anything with it,‚Äù she said. ‚ÄúI don‚Äôt ask for much,‚Äù she said, requesting that commissioners reduce the valuation of her house from $48,700 to $38,500. She said what she called an ‚Äúappraisal‚Äù done by a McCook real estate agent supports her request.

Korell explained that the valuation of residential properties is determined in part by market value and recent sales (within the past two years) of comparable properties. ‚ÄúComparable properties,‚Äù or ‚Äúcomps,‚Äù take into consideration, among other things, location (nearness), total square footage, age, style (one-story, two-story, split level, etc.), garage (yes or no, attached or detached), basement (finished, partially finished or not).

Houses similar to the homeowner‚Äôs have sold for $45,000 to $52,500, Korell said. She explained that what the homeowner called an appraisal is actually a comparative market analysis, (which is not as detailed as an appraisal done by a professional appraiser) and uses older homes as comparable properties.

The ‚Äúquality‚Äù rating of a property is determined by its construction and is rated ‚Äúlow‚Äù to ‚Äúexcellent.‚Äù

A low rating in either or both condition or quality can result in a lower valuation. Remember, however, that allowing a home to deteriorate to justify a lower valuation can affect a property‚Äôs value at time of resale.

Korell said that Nebraska law requires that residential properties be valued for tax purposes at 92-100 percent of fair market value ‚Äî what the property would sell for (not the initial asking price) under normal conditions.

Korell reported to commissioners in her ‚Äú2018 Plan of Assessment‚Äù that the median level of value for residential properties in Red Willow County is 94 percent. It was 93 percent last year. If the state finds that Red Willow County‚Äôs residential properties are not valued within the 92-100 percent range, it can demand that they be valued at 100 percent of fair market value.

Korell explained that the actual amount of the homeowner‚Äôs taxes will be determined after taxing entities like the county, the city, the schools and the college set their levies in October. The homeowner asked, ‚ÄúI know they need money, too. But you‚Äôll still do this, raise our taxes, even though we‚Äôre hurting, ourselves?‚Äù

Multiply her home‚Äôs valuation by the tax levies, and that will determine her tax bill, Korell said. McNutt said that, at the new valuation, a quick calculation shows that the county‚Äôs portion of the homeowner‚Äôs tax bill would increase only by about $31.

The assessor does not compare the percentage of increase from one house to another within a neighborhood. Every property is not increased by the same percentage because that would miss individual updates or situations of concern in condition and/or quality.

Downer said they would provide her with a decision in writing by July 25. If she is not satisfied, she can file a further protest with the Nebraska Tax Equalization and Review Commission (TERC) in Lincoln.

The tree is wonderful and will be great to work with in his shop, he said. He also thought he might be able to provide a bit of community improvement by taking care of the property.

This is a perfect example of how deceptive the exterior of a house can be. The pretty powder-blue siding, decent windows and somewhat historical feel of this house‚Äôs exterior are misleading about the interior. It‚Äôs been gutted, what lathe-and-plaster walls remain are cracked. There are no floor coverings, no water and no electricity. The foundation is crumbling red brick. There have been many owners, but no one‚Äôs lived in the house for years, the property owner said.

The homeowner asked that the county‚Äôs valuation of $50,136 (determined in part, yes, by the appearance of the exterior) be reduced to $5,000, which is what he paid for the property a year ago.

‚Äî One homeowner told commissioners and Korell that he compared his percentage of increase with all of his neighbors. ‚ÄúMy valuation increase is excessive. I‚Äôm on a fixed income and retired. A $500 increase in taxes is a pretty big bite when you‚Äôre on Social Security,‚Äù he said.

Korell told the man that properties like his ‚Äî rural but still close to a major highway ‚Äî can sell higher than similar houses in town or further off the highway.

Korell said that it‚Äôs difficult to compare a 2,000-square-foot house with one that‚Äôs substantially smaller, so assessors use value per square feet to try to equalize the properties. A mobile home in the homeowner‚Äôs neighborhood sold for $188 per square foot, and his is valued at $79.70 per square foot. A similar stick-built home sold for $85 per square foot, she said.

‚Äî Another homeowner, probably not too far away, said that her barn is about to fall down and should have zero value. ‚ÄúIt‚Äôs unsafe to walk in,‚Äù she said. ‚ÄúThere‚Äôs no value to it.‚Äù

Korell said the standard practice is not to ‚Äúno value‚Äù something unless it‚Äôs been torn down. She has placed a value on the barn of $1,358, with an 88 percent depreciation.

McNutt said sometimes it‚Äôs unfortunate that sales drive valuations. ‚ÄúPeople really like rural homes,‚Äù he said, and often pay up for the location as much as for the house and/or outbuildings.

Riener said that small acreages sell very well, and often drive up the value of neighboring similar properties. The homeowner‚Äôs entire property (with the land valued at $25,900) is valued at $91,088. Riener said, ‚ÄúSome people even like these older houses. We can line up a lot of people who would pay $91,088 for your acreage.‚Äù

‚Äî A rural McCook homeowner said that the property valuation of the home and land that he now owns has quadrupled in value since 2000. ‚ÄúThis is out-of-line,‚Äù he said.

The property is another small acreage close to a paved road/highway.

‚ÄúBuyers are buying small sites like this,‚Äù McNutt said. ‚ÄúYou get a willing buyer and a willing seller, and some sites are selling for bizarre prices.‚Äù And those sales, however exorbitant they may seem, are part of what‚Äôs driving the market, he said.

‚Äî Korell told a Driftwood Precinct landowner that land taken out of irrigation is still taxed as irrigated land. The landowner wants the valuation of his land slashed nearly in half because he has enrolled it in a USDA Conservation Reserve Program (CRP) cost-share payment program for the next 15 years.

‚Äî Korell explained to a rural Bartley couple that their 10 1/2-acre rural residential property is valued at $18,000 for the first acre, $2,000 an acre for the next nine acres and $1,000 per acre beyond that which remains as non-income-producing home site.

The homeowner was not complaining, he said, about the value placed on his home, well and outbuildings (except that the siding was bought ‚Äúcheap‚Äù and ‚Äúdamaged‚Äù), but on the nine acres valued at $2,000 each. ‚ÄúIt‚Äôs nothing more than trashy trees, the creek, marijuana and thistles,‚Äù he said. Hmmm ‚Ä¶ commissioners and Korell contemplated.

‚Äî Another rural resident, this one of McCook, said she was ‚Äúmad ‚Ä¶ mad‚Äù about her property valuation. ‚ÄúMy place is getting pretty run-down and the garage is leaking,‚Äù she said. She said she can‚Äôt keep up since her husband died.

She continued, ‚ÄúRed Willow County is the fourth poorest county in the state, and Social Security isn‚Äôt giving any raises. Yet you keep raising our property taxes. My house is outdated inside and outside, and I‚Äôve seen another outdated one that‚Äôs not getting sold. I have no idea what this place would bring now.‚Äù

Korell said her office based the house‚Äôs valuation, in part, on value per square foot, with the homeowner‚Äôs house estimated at $92 per square foot and comparables at $99 to $111 per square foot. The length of time on the market is not taken into consideration, she said.

Several homeowners told the board and Korell, ‚ÄúI haven‚Äôt made any improvements in the house.‚Äù

A misconception in property valuation is that ‚Äúimprovements‚Äù mean remodeling, expanding, renovating, shingling, painting, installing new doors and/or windows. In a tax-valuation context, ‚Äúimprovement‚Äù means anything that adds to the value of the original piece of land; the house itself is an ‚Äúimprovement.‚Äù

Expanding a house, of course, is an increase in total square footage. The addition of an outbuilding, such as a garage, adds value to the property. Remodeling, renovating, new doors/windows, etc., is considered in the condition rating of a home.

It‚Äôs important to remember that an increase in a property‚Äôs valuation does not mean the owner‚Äôs tax bill will increase by the same amount or percentage.

In theory, if a governmental entity or other tax-asking jurisdiction keeps its budget stable and does not increase its tax levy, an increase in a property‚Äôs valuation does not automatically mean that taxes on the property will go up.

It is taxpayers‚Äô responsibility to be informed about the budget processes of their cities/villages, county governments, their schools and colleges, and anyone else who requests their money. They need to let those who set the budgets for tax-payer-supported entities know that taxpayers demand conservative-minded elected officials and penny-pinching budgets and that they do not want increased tax bills.

Some homeowners qualify for ‚ÄúHomestead Exemptions,‚Äù which provides relief from property taxes by exempting all or a portion of the valuation of the homestead from taxation. The state of Nebraska reimburses counties for the reduction in tax revenue as a result of approved homestead exemptions.

A homestead exemption is available to: Persons over 65; qualified disabled individuals; and qualified disabled veterans and/or their widow(er). The applicants must own and occupy the home. There are sliding-scale income limits and homestead value requirements. The filing date is Feb. 1 through June 30 every year.

Commissioners and Korell have a couple more days of protest hearings before the July 25 deadline for their decisions.

Property owners who are dissatisfied with the decisions can appeal to the Nebraska Tax Equalization Commission (TERC) for a filing fee of $25.

The TERC is a constitutional body created by the Nebraska Legislature in 1996 to provide a simple, inexpensive avenue of appeal for property owners to challenge the assessment of property in Nebraska.

A TERC appeal form is available at Korell‚Äôs office or by downloading and printing the form at: terc.ne.gov/appeal_process